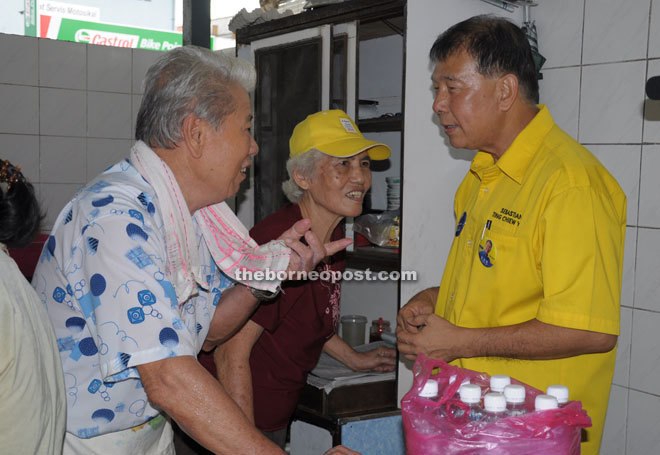 Ting (right) speaking to hawkers during his campaign at Miri Open Air Market.

MIRI: Behind the warm smile and soft-spoken personality, Datuk Sebastian Ting has a strong will to serve the people.

His defeat by PKR’s Dr Teo Yu Kheng in the 13th general election in 2013 had not broken him.

Instead, in the ensuing two years, Ting persistently went around Miri City and rural areas to meet those in need of his assistance.

“Perhaps, it was my childhood experience that motivated me to keep going,” he told The Borneo Post in an interview yesterday.

Growing up in a huge family of nine, Ting shared that he understands the value of money and what it can do to make a difference to one’s life.

“My mum took up a few jobs including washing laundry, baby sitting, etc to support the whole family. Back in Sibu, life was hard yet the happiness my siblings and I felt were genuine. We did not complain on how we did not get to enjoy the luxury our peers had. Instead we made good use of what we had and still felt contented,” he said.

It was in Kuching that he felt the importance of having a place that one could call home.

Life wasn’t better there, according to him, as they had to move house often because tenants wanted to increase the rental which his parents could not afford.

It went on for several years until he enrolled in St Joseph’s Boarding School, Kuching in 1970 when he was 15 years old.

The BN candidate for Piasau noted that soaring housing prices in Miri had become so drastic in recent years so much so that it deprived the younger generation, especially those from the middle-income and low-income groups, of their chance to own a house.

“The demand for affordable housing and low-cost houses is very high, therefore it is vital for the government to look into this matter, so that everyone can afford a house,” he said.

Ting further said education is another issue that concerns everyone and that the government should look into this matter very seriously.

“Education opens one’s horizon and their opportunity to work out a better life for themselves.

“Every child is born smart.However, it is the learning environment that matters, therefore, providing a conducive environment with at least basic facilities is vital to ensure that children are able to learn as much knowledge when given the opportunity,” he said.

Ting also shared his concern over the lack of utilities in rural and squatter areas.

“I had witnessed children struggling to study under a candle light and it breaks my heart to see this though Miri has already been elevated to city status for 11 years. The reason given by Sarawak Energy Berhad (SEB) for refusing the squatters the utility was that the residents do not have land title.”

Despite the criticism and negative comments, Ting insisted that he would follow his dream and continue to serve the people.

“Apparently, I am a positive person. Anything negative would automatically turn into a motivation for me to work harder.

“It is not about proving to people what I can do, it is about the satisfaction of giving and able to help those in need and those who require special help from the authority,” he said.