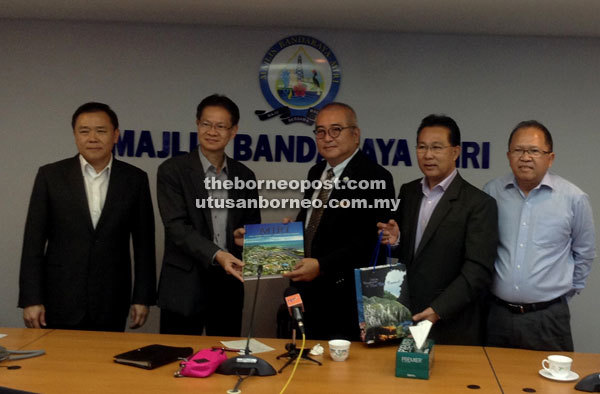 Yii (centre) presents a souvenir to Lu. With them are (from left) Lau, Julaihi and Chia.

MIRI: Sarawak Energy Bhd (SEB) has so far invested about RM900 million on its initiative to upgrade the distribution of electricity supply for this city slated for the period from this year to 2020.

“Within these five years, we have lots of plans. Several projects are already completed, while a few are expected to be completed soon,” he said during a dialogue between SEB and Miri City Council (MCC) here recently.

He added that SEB had spent RM600 million to reinforce extra-high voltage supply network to this city.

In addition, another RM300 million had been spent on reinforcing power distribution sites of 33KV and below.

“SEB has never neglected the demand of the people for better power supply in Miri. We actually pay a lot of attention on how to make power supply more reliable for the city.”

During the session, Miri Mayor Adam Yii highlighted to SEB on the need for reliable and adequate power supply in the city.

“Although the issue of power failure is not serious, we still need to address this problem accordingly. It is because the people are now expressing their dissatisfactions via social media,” he said.

“We do not want this matter (power failure) to tarnish the image of Miri as a resort city, especially among tourists.”

Meanwhile Lau Kim Swee, the chief executive officer of Sesco – a subsidiary of SEB that handles the generation, transmission and distribution of electricity in the state – ecouraged the public to download the ‘SEB Cares’ app onto their smartphones.

Out of more than 600,000 SEB consumers, Lau said 8,000 of them were already using the app to lodge reports and also to receive the latest information about power supply from SEB.