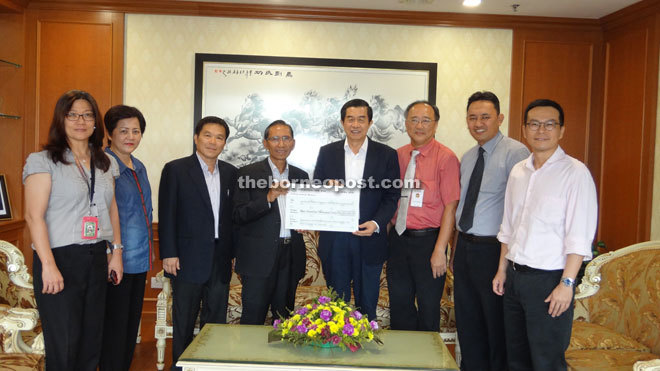 Choo (fourth right) presenting a mock cheque for RM200,000 to Sarudu (fifth right) to carry out phase four of the project at Wisma Sumber Alam.

According to a press statement from STIDC, the financial assistance is to help schools improve their facilities for a more conducive environment for learning and teaching.

Receiving the donation on behalf of the schools was Lawas District education officer Awang @ Ibrahim Amat from Tengah in a ceremony at Lawas Basketball Court organised by STIDC, Giatmara and Lawas District Education Office.

The project is a collaborative effort between STIDC and STA Mutual Sdn Bhd (STAM), a subsidiary company of Sarawak Timber Association (STA) to improve the teaching environment of schools in Sarawak.

Starting in 2012 with an initial annual financial contribution of RM100,000, the programme expanded with an increased allocation of RM200,000 from 2013 onwards.

STAM has so far contributed a total of RM700,000 to STIDC which will, in turn, liaise with the relevant District Education Office to identify primary and secondary schools in each district eligible for aid. Under phase one, 98 primary and 11 secondary schools in the Mukah, Dalat, Matu and Dato areas received financial assistance on April 26, 2013.

Under phase two, 59 primary and 11 secondary schools in the Bintulu, Tatau, Sebauh and Belaga areas received financial assistance on Aug 26, 2014.

Under phase three, 139 identified primary and 28 secondary schools in the Miri, Subis and Baram areas received the financial assistance on Feb 23, 2016 while phase four was for schools in Lawas and Limbang.