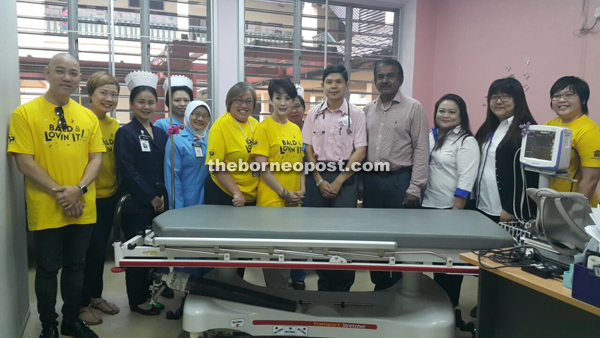 SCCS hands over medical equipment comprising monitor, transport trolley, wheelchairs and a humidifier worth more than RM51,000 to Bintulu Hospital.

“At the moment, we have yet to confirm the venue as we are in the midst of arranging it with Permaisuri Imperial City Mall. However, rest assured that it will happen sometime in that month, therefore, members of the public who like to learn more about childhood cancer can look out for our publicity on this event,” she told thesundaypost yesterday.

More importantly, she added, the awareness campaign is meant to educate members of the public on the role of SCCS in assisting paediatric cancer patients and their family to endure through the gruelling moments of treatment as well as assisting in arranging transportation and accommodation for outstation patients.

“In fact, this is where the money raised through Go Bald campaign as well as other donations from individuals and corporate entities are used, and we are making sure that the people could see where the money goes.”

“I was in fact, overwhelmed by the amount of support showed by Sheda and Yaw, especially when he had decided to shave his head if he could raise more than RM50,000 in donation. His selfless deed resulted in donations pouring in from members as well as local prominent businessmen which amounted to over RM109,000,” said Hee delightedly.

SCCS has donated some medical equipment comprising monitor, transport trolley, wheelchairs and a humidifier which in total were worth more than RM51,000 to Bintulu Hospital.

“The funds used for the purchase of the equipment were previously raised by Press Metal Bintulu Sdn Bhd during their Santa Run held in December 2014. During the time, they had wanted the donation to be used for Bintulu, hence we decided to purchase this equipment and donate to Bintulu Hospital.

“We hope that with these equipment, doctors and nurses will be able to better monitor and provide better comfort for its Paediatric Oncology patients.”

Hee disclosed that last year, SCCS sponsored various lab test and medical equipment amounting to RM247,000 to various government hospitals in Sarawak with the objective of providing better care and treatment for the children.

Members of the public who are interested to contribute to the aims of SCCS or to know more about the society, can visit its website at www.sccs.org.my or email to administrator@sccs.org.my or visit Facebook page http://www.facebook.com/swakchildrenscancersociety.