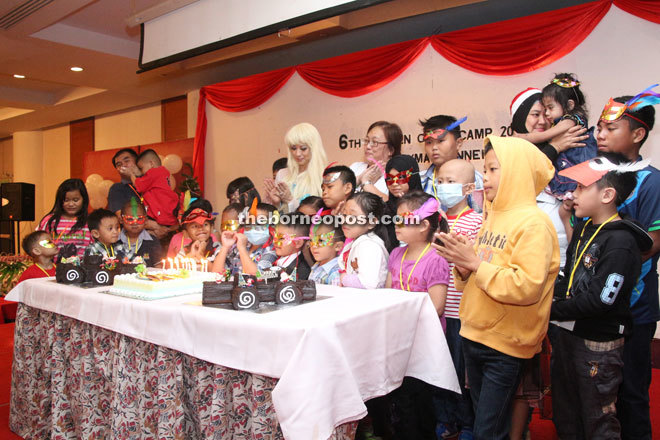 The children during a pre-Christmas celebration in 2014.

MIRI: Sarawak Children’s Cancer Society (SCCS) marked its 14th anniversary by reaching out to parents of children who had been diagnosed with paediatric cancer.

SCCS said though the society had been around for more than a decade many parents were not aware of the symptoms of paediatric cancer.

Recently, SCCS compiled all the types of childhood cancers which include leukaemia, brain cancer, lymphoma, adrenal, soft tissue sarcoma, kidney cancer and retinoblastoma to create more awareness of these illnesses.

Symptoms of leukaemia depend very much on the type of leukaemia. However, typical symptoms that occur include fever, night sweat, feeling of fatigue and tiredness, swollen lymph nodes, easy bleeding or bruising (that causes bluish or purplish patches or red spot on skin), bone or joint pain, weight loss etc.

If leukaemia cells affect the brain, symptoms such as headache, seizures, confusion, loss of muscle control and vomiting can occur as well.

In the case of brain cancer, the tumour can cause symptoms due to two reasons – the size and the specific position in the brain.

Common symptoms include headache and seizures. Headache could be mild and slowly develop into a bad one which could happen daily and last for a long time.

Moreover, depending on the position of the tumour in the brain, the symptoms could be

In paediatric brain cancer, the symptoms include frequent vomiting, difficulty in walking, weakness/numbness in part of the face or on one side of the body, hormone imbalance and ■■■■■■■■ growth c.

Usually, symptoms of liver cancer do not show up until the later stages of the disease. They include drastic weight loss, loss of appetite, nausea or vomiting, enlarged liver (like a mass under the ribs on the right side), pain in the abdomen, swelling or fluid build-up in abdomen and yellowing of the skin and eyes (jaundice).

A patient with paediatric kidney cancer may experience symptoms like blood in urine, swelling of ankles and legs, enlarged stomach and high blood pressure.

An early symptom of lymphoma is painless swelling in the upper body lymph nodes at the neck, collarbone region, armpits or groin.

Though a swollen lymph node is normally not as painful as an infected lymph node, the following symptoms and signs are vital to check for the possibility of lymphoma – temperature swings, fever, unexplained weight loss, loss of appetite, persistent coughing, breathlessness, enlarged tonsils and headache.

Retinoblastoma is a common type of eye cancer in children that starts in the retina. Its symptoms include white pupil, squint, inflamed/swollen eye and enlarged pupil that affects vision.

In paediatric bone cancer, tumour is commonly found at the long bone (thigh bone) before spreading to other parts of the body.

Symptoms and signs of bone cancer include pain, joint swelling and stiffness and limping (or fracture which is usually a symptom of later-stage bone cancer). Less common symptoms are fever, sickness, weight loss and anaemia (low level of red blood cells).

Many symptoms of neuroblastoma are caused by pressure from tumour or bone pain (if the cancer spreads to the bones). Symptoms include lump or mass in abdomen, chest, neck or pelvis; weak and gradual weight loss, pain in the back, numbness or paralysis of the legs if the tumour has spread to the spinal cord.

Jocelyn Hee, Miri SCCS secretary and liaison officer, told The Borneo Post that leaflets informing of these symptoms had been widely distributed to the public so that they will be more aware of these illnesses.

“Of course, we credit these efforts to our medical experts in general hospitals who have been advising us on the general symptoms and their occurrence to give a clearer picture,” she said.

She advised the public to visit SCCS’s official website www.sccs.org.my if they wish to know more.

Hee added that SCCS had also put all the symptoms together into something that is easy to remember as follows:

· Aches and pain in bones,

joints, back or legs

· Nausea which persists or vomiting without nausea

To date, SCCS members had gathered more than 800 people from all over Sarawak – 440 in southern part of the state (Kuching, Saratok, Kota Samarahan, Sarikei, Lundu, Sri Aman and Bau); 215 in the central region (Sibu, Mukah, Belaga and Bintulu) and 160 from northern region (Miri, Kuala Baram, Niah, Marudi, Bario, Limbang and Lawas).

“SCCS relies solely on public donation. The fund is raised through various channels and public donations are mostly used to fund medical expenses. Other expenses include support services, financial aid (to poor families), training and travelling expenses (for those from remote areas),” she said.

Hee revealed that Miri transit home will be officially launched on January 16, which she credited to the hard work of her northern region team to make sure that all is ready on time.

“Apart from learning about cancer, we are grateful that our road shows and events have been receiving great support, both mentally and financially, from the public and corporate companies, who make our transit home a reality,” she said, adding that all interested members of the public are welcome to visit the centre during the opening day to learn more about their centre.

In commemoration of the International Childhood Cancer Day, SCCS is organising 5km charity run, ‘Colour Rush’, which will be held on Feb 21 in Kuching, Feb 28 in Miri and March 13 in Sibu. This year will be their fourth year organising this event which is a campaign to raise awareness of childhood cancer in Sarawak, as well as to encourage the younger generation to demonstrate more understanding and empathy towards children with cancer. The usual colour powder will be substituted with colourful T-shirt and tutu-dress.