Saudi Arabia: Our total exports catching up on Singapore!

Saudi Arabia, the planet’s leading oil supplier and also the Muslim world’s biggest exporter, exported 7.470 million barrels of crude oil per day in July, up from 7.315 million in June, according to figures posted on the Joint Organisation Data Initiative (JODI) website. Non-oil exports, on the other hand, are in line with last year’s trend, with plastics still dominating the segment with 31.4%, chemical products 31.1%, transport equipment 14%, and base metals 5.4% of all non-oil exports. Oil remains account for over 90% of all Saudi Arabian exports. The rise in Saudi shipments came as Iraq, OPEC’s second largest producer, and Nigeria reported lower exports, while Asian buyers cut back on Iranian crude imports. “It is very clear that the Saudis are making up for the fall of other OPEC producers,” said Kamel al-Harami, an independent oil analyst based in Kuwait. “With less Nigerian and Iranian crude reaching the market and refineries back from seasonal maintenance, it is normal to see buyers coming to Saudi Arabia asking for more,” he said.

Indeed, Saudi Arabia is pumping out more crude than at any time since at least the 1970s. In neighboring Kuwait and the United Arab Emirates meanwhile, oil production levels have likewise hit record highs. With oil continually staying above US$100 a barrel, the Kingdom is now reaping more than US$1 billion a day in export revenues, a 5.3% rise from a year earlier, while rival Iran’s income from oil sales abroad sank by 12%, OPEC reported. The 7 biggest Arab oil states, Saudi Arabia, Iraq, United Arab Emirates, Kuwait, Libya, Algeria and Qatar, earned US$833 billion from oil last year.

There are however, concerns over the country’s rapidly-rising domestic consumption, whose electricity and petrol are heavily subsidized by the state. Saudi Arabia, the world’s largest oil exporter, could become an oil importer by 2030, according to analysis by Citigroup’s Heidy Rehman. It appears the Kingdom now consumes a quarter of all its production. In fact, on a per-capita basis, Saudi Arabia is consuming more oil than most industrialized nations.

“It already consume 25% of its production. Energy consumption per capita exceeds that of most industrial nations. Oil and its derivatives account for 50% cent of Saudi’s electricity production, used mostly (>50%) for residential purposes. Peak power demand is growing by 8% a year. Our analysis shows that if nothing changes Saudi Arabia may have no available oil for export by 2030. It already consumes all its gas production - Saudi Arabia produces 9.6 billion cubic feet of natural gas per day. This is entirely consumed domestically. At the domestic level, we believe the only real way to rationalize energy consumption would be to reduce subsidy levels,” Rehman wrote.

For now however, Saudi Arabia is enjoying a sunny day; it is catching up on Singapore, the 13th biggest exporter in the world. Last year, Singapore, Southeast Asia no.1 exporter, exported US$435.8 billion worth of goods, compared to Saudi Arabia US$395 billion. According to trade agency IE Singapore, Singapore’s non-oil domestic exports declined by 6.2% in August from a year ago, following the 1.9% decrease in the previous month. It is the 7th consecutive months of contraction, with the figures came in below market expectations. As a result, FocusEconomics Consensus Forecast panelists see Singapore’s overall nominal exports expanding only by 1.4% this year, which would bring exports to a total of US$442 billion. Saudi Arabian exports, on the other hand, is projected to reach US$424 billion, narrowing the gap between the Middle East’s biggest exporter and its Southeast Asian counterpart.

Singapore, an island nation with no natural resource, exports mainly electronics, chemicals and pharmaceuticals products. As one of the world’s biggest refinery center, it also exports 1.4 million barrels of refined oil everyday. Electronics and integrated circuits made up the biggest segment of Singapore’s exports at 20%, with the island responsible for making 10% of the world’s semiconductor wafer foundry. While Singapore’s economy grew at the fastest pace in more than two years last quarter as service industries strengthened, there is no sign of pickup in exports.

“Demand from the U.S., Europe and Japan stands out for its weakness and that is still a cause for concern,” said Alvin Liew, a senior economist at United Overseas Bank Ltd. (UOB) in Singapore. “The recovery process for exports, especially for electronics, could be delayed.” ADB assistant chief economist Joe Zveglich told Bloomberg Television’s Susan Li in an interview in Tokyo, “The weak growth coming from the advanced economies, the weak demand, is having a much bigger effect than we had anticipated.” 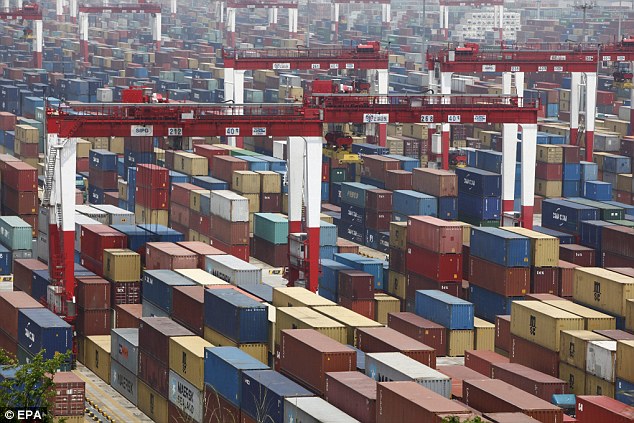 China strengthens its position as the world’s biggest exporting nation

Despite that, Singapore’s 5-million highly diversified economy still have a per capita income nearly 2 times richer than Saudi Arabia’s 30-million oil-dependent economy. Located at the southern end of the 600-mile (965-kilometer) Malacca Strait, Singapore is home to one of the world’s busiest container ports. The government has boosted the financial services and tourism industries to become less reliant on exports. Rival Hong Kong was the 11th biggest exporter last year at US$464.6 billion while neighboring Malaysia the 23rd with US$247 billion.

China’s position as the world’s biggest exporter remains unshaken, it now exports US$2.057 trillion worth of goods. The United States came in at second, but the German chambers of commerce says it is confident Germany could overtake the U.S. this year. “Germany, who exports automobiles like BMW cars to washing machines to heavy machinery for manufacturing and agriculture, has the right stuff this year to overtake the United States into second place. That’s due to the strong euro because trade data is calculated in dollars. Germany should also be able to hold onto second place in 2014 as well,” DIHK foreign trade head Volker Treier said.

Japan sees no imminent threat to its position as the world’s fourth largest exporter. France, whose economy was hit by recession and stagnation in the first two quarters of the year, risks being overtaken by South Korea as the fifth biggest exporter. The greatest irony is perhaps, the United Kingdom, whose US$474.6 billion exports last year was a mere US$10 billion more than former colony Hong Kong, a sign of how far the nation once known as the ‘workshop of the world’ has fallen from its height.