Sarawakians urged to know their rights under MA63 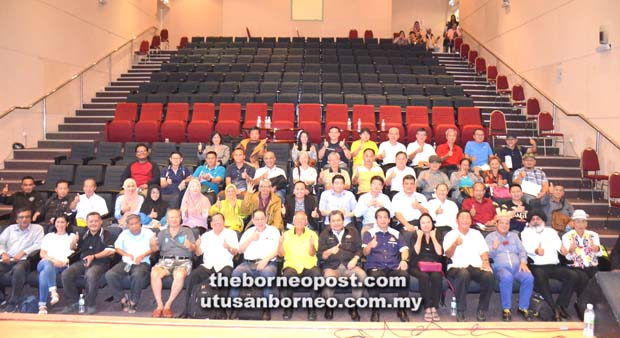 (Front row from sixth left) Teng, Zainnal, Ting, Idris, Dennis, Soo and others in a photocall after the forum.

MIRI: Sarawakians are urged to be more conscious of their rights, especially in the context of the Malaysia Agreement 1963 (MA63), and its history in order to fight for the restoration of equal partner-status in the formation of Malaysia.

Secretary general of Sarawak United People’s Party (SUPP) Datuk Sebastian Ting said the awareness was vital to ensure the move would be in the best interests of Sarawakians.

“This journey (restoring Sarawak’s rights) is very important for the people of Sarawak.

“The Federation of Malaya, North Borneo, Sarawak and Singapore merged to form the Federation of Malaysia on Sept 16, 1963, as equal partners. But, amendment to Article 1(2) of the Constitution on July 13, 1976, downgraded Sabah and Sarawak as the 12th and 13th states of Malaysia, instead of equal partners. This should not have happened,” said Ting when met after ‘Sarawak, Our Future’ forum held at Pustaka Miri recently.

Ting, who is also Piasau assemblyman, said SUPP had always been consistent that Sarawak is one the three founding partners of Malaysia, and not equal partners with other states in the peninsula.

“SUPP was formed in 1959. We opposed British rule and the formation of Malaysia. That was our struggle then, and it is important for Sarawakians to continue the fight.

“Nevertheless, when we ask for or talk about things, we should always take the best interest of all Sarawakians. We have to speak for Sarawak,” he said.

“The prime minister also mentioned that a two-thirds majority was needed to effect the legislative amendments in Parliament, and wondered whether this would be supported by opposition MPs from Sabah and Sarawak.

“I have called on Sarawak and Sabah MPs to take proactive action by tabling the amendment bill of Article 1(2) of the Federal Constitution in the coming Parliament sitting to state that Malaysia shall consist of Malaya, Sabah and Sarawak,” said Ting.

Ting added that this would not have been made possible prior to the abolishment of the Internal Security Act (ISA) 1960, and Emergency Ordinance (EO) in 2011.

“If we spoke about such issue years ago, when ISA was still around, people would likely be locked up.

“However, when Datuk Seri Najib Tun Razak became the prime minister in 2009, he abolished the ISA 1960 and EO in 2011. Because of that, all our laws in Sarawak have became applicable, and that was how Oil Mining Ordinance (OMO) came in.”

The political forum was first held here in Nov 2015.

“Since then, we have been conducting the forum in Kuching, Sibu, Miri and Bintulu, and we will continue to do so in other towns of Sarawak.

“Through this forum, we hope to let more people of Sarawak know their rights as contained in MA63,” he added.

Among topics for discussion were the MA63 and Oil Mining Ordinance (Amendment) Bill 2018.