Sarawak’s target of having at least 1,200 telco towers achieved – CM 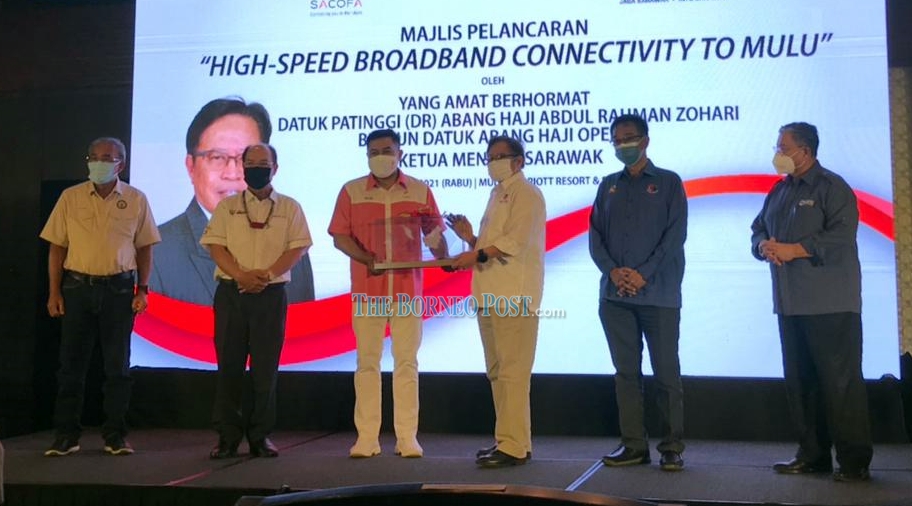 Abang Johari (third right) receives a memento from Mohamed Zaid as others look on.

MIRI (April 7): The Sarawak government has achieved its target of having at least 1,200 telecommunication towers statewide as part of its ongoing effort to upgrade and expand the telecommunication infrastructure and high speed Internet in the state, said Datuk Patinggi Abang Johari Tun Openg.

The chief minister said according to the Sarawak Digital Economy Strategy 2018-2022, Sarawak must have at least 1,200 towers that are equipped with devices that enable communications between one point and another.

“But today, before 2022, I think we achieved that target between Sarawak Multimedia Authority (SMA) and The Malaysian Communications and Multimedia Commission (MCMC).

“We in Sarawak built 600 towers while MCMC will roll out within this period additional 686 (towers) under the National Digital Network (Jendela) plans,” he said at the launching of High-Speed Broadband Connectivity to Mulu today.

Hence, Abang Johari said as of today, Sarawak has more than 1,200 towers including the ones that were previously built.

He added that with the amount of towers that have been built, certain strategic areas in Sarawak have been covered with Internet connectivity.

He stressed that it was a challenge to erect these telecommunication towers especially in rural Sarawak due to the geographical challenges.

“When we talk about connectivity, the important thing is signal. Our challenge here is that we have a lot of mountains.

“For us in Sarawak, our landscape is challenging including in Mulu. Ranges of mountains and we have to identify the right alignment.”

Abang Johari stressed the need for tourism spots like Mulu to be equipped with high-speed Internet.

“We had breakfast in my room this morning and I told them that the speed (internet) is fast. But Morshidi (Sarawak Digital Economy Corporation (SDEC) chairman Tan Sri Datuk Amar Mohd Morshidi Abdul Ghani) said that he did not get it.

“I thought every corner of this resort has high speed internet, (but it) turned out it was only in my room,” said Abang Johari.

Therefore, Abang Johari said he had asked Sacofa who was building the high speed broadband connectivity to Mulu discuss with SDEC on the cost to upgrade the Internet connectivity in the resort.

“With all that, we can market Mulu aggressively post-pandemic. With jabs (Covid-19 vaccination) and travel bubble, we will ‘bubble’ Mulu later on aggressively and get these people (tourists) to come over to Mulu.

“I am confident that our tourism industry will recover. Even though it will take some time but if we have all these facilities, the time taken will be shorter,” he added.

During his speech, Abang Johari also said the state government is bidding for Niah National Park to be recognised as a United Nations Educational, Scientific and Cultural Organisation (Unesco) heritage site.

The three towers are located at Beacon Hill (near Mulu Airport), Long Panai and in Mulu National Park.

“The tower in Long Panai was the most costly, with many technical and logistical challenges. The tower in Mulu National Park was funded by MCMC in collaboration with Digi. It is the most remote 4G network in Sarawak,” he said in his speech.