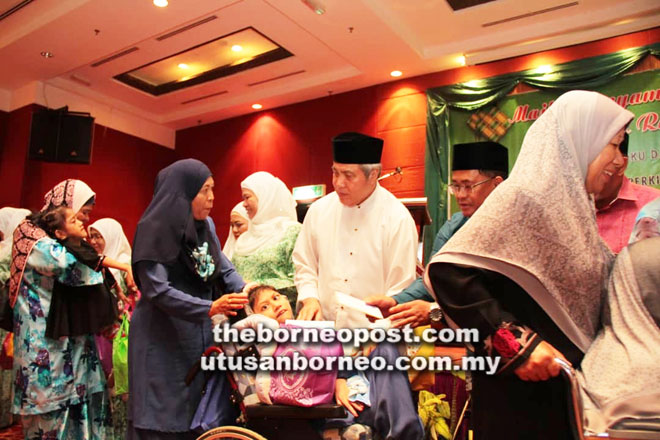 Awang Tengah, flanked by Dayang Morliah and Ahamd Denney, chats with the mother of a boy with special needs during the presentation of Aidilfitri goodies at Hotel Seri Malaysia Lawas.

LAWAS: The Sarawak government is exploring the possibility of introducing a scheme to assist poor and deserving kidney patients who are undergoing dialysis regularly.

Chief Minister Datuk Patinggi Abang Johari Tun Openg is supportive of the idea and wants the Ministry of Welfare, Community Well Being, Women, Family and Childhood Development to study this proposal.

This was highlighted by Deputy Chief Minister Datuk Amar Awang Tengah Ali Hasan prior to the presentation of Aidilfitri goodies to 262 individuals with special needs and orphans at Hotel Seri Malaysia here yesterday.

He acknowledged that many kidney patients in Sarawak could not afford the costs involved for dialysis, which is usually done three times weekly.

“Many patients have to incur other expenses as well, particularly those in Lawas who have to seek haemodialysis treatment in Labuan or Kota Kinabalu.

“As such, this (scheme to assist poor kidney patients) is in line with the state government’s inclusive approach in ensuring that assistance could be provided to all deserving Sarawakians through various programmes,” said Awang Tengah, as he called upon the District and Resident’s offices to ensure that those eligible for aid, as per Welfare Department’s requirements, would not be ‘left out of the safety net’.

On the proposed orphanage to be run under Orphans Welfare Organisation of Malaysia (Peryatim) Lawas branch, he said the project was meant to cater for the demand in Limbang and Lawas districts.

It is learnt that currently, Peryatim Lawas has to send local orphans to the Peryatim orphanages in Kuching and Miri.

Moreover, he said the planned Peryatim orphanage here would include boarding and other facilities.

“Such model has proven successful in providing quality education to orphans,” he added.

Moreover, Awang Tengah also commended Perkim Lawas for emerging as the third most active Perkim branch in the country, which reflected the support and cooperation between its members and the public in carrying out various activities.

He also called upon more young women to join Perkim Lawas as apart from religious activities, the organisation is also involved in charity, welfare, women’s empowerment, skills development and education programmes – to name a few.

According to Awang Tengah, Perkim was instrumental in the eventual establishment of the community-based rehabilitation centre here.

She also took the opportunity to announce that she and her husband would host their Hari Raya Aidilfitri open house at their residence here on the second and third day of the celebration.