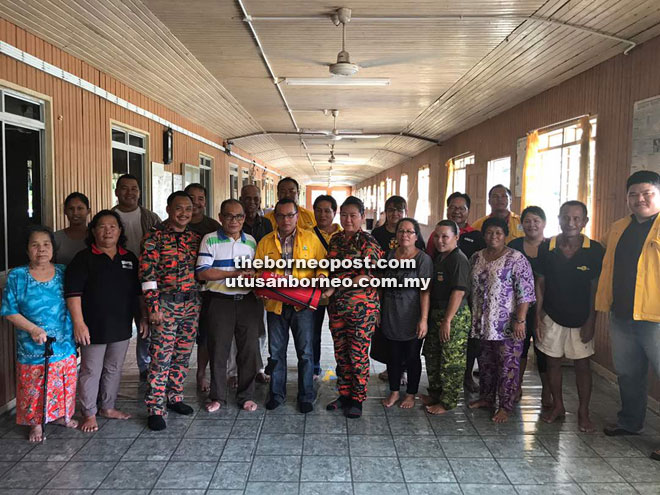 Suffian (front, fifth left) presents a fire extinguisher to Meran Surang as others look on.

MIRI: Petronas has assured that villages and schools located along its Sabah Sarawak gas pipeline (SSGP) from Tinjar to Apoh Tutoh in Baram are well taken care of.

“SSGP would make every effort to visit and return to areas located along our pipeline, to spend time with the folk and be part of their activities, on a regular basis – once in every three months every year.

“For every visit, we will also bring along local enforcement agencies including the police and the Fire and Rescue Department (Bomba),” Suffian told The Borneo Post yesterday.

Their recent visit to the interior of Baram took place from Sept 18 to 20.

Several activities were held during the visit to make full use of their time there.

On the first day, the delegation held a talk and demonstration on kitchen fire safety to residents of Rumah Meran Surang in Lapok.

“We also handed a fire extinguisher to the village chief for the use of the longhouse residents and helped to maintain six units of their fire extinguishers that have expired,” said Suffian.

The delegation visited SK Long Kevok on the second day of the visit.

“Our team conducted inspections on both male and female dormitories on their fire safety equipment and provided the residents emergency response plan for any accident and unwanted occurrence.

“A talk on fire safety in schools and villages was held for the residents. Police also conducted a talk on drug abuse to students and the villagers,” said Suffian.

On the final day, the delegation made a visit to SK Long Bedian, where Bomba personnel inspected both male and female dormitories on fire safety equipment and the police conducted a talk on drug abuse.

“We also visited Rumah Johanes Sang at Jambatan Teru and held a fire safety campaign as well as conducted a talk and demonstration on fire safety.

“A fire extinguisher was handed to the longhouse headman Johanes Sang,” he added.