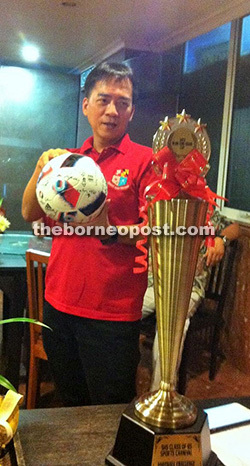 SIBU: For the Class of 1985 (Form Five) of Sacred Heart School (SHS), last Saturday’s inaugural soccer match was more than just goals to boot but is lasting testament of their friendship that has spanned over three decades.

The soccer friendly at Sacred Heart Secondary School here was fondly known as ‘SHS Class of 85 Sports Carnival’ as the boys wanted it to reflect their strong bond which have withstood the test of time.

True indeed, as many overcame geographical barriers, flying here from as far as Kuala Lumpur, Kota Kinabalu, Miri and Kuching just to partake in the game.

Former head prefect Hii Chang Kee, who is now Sibu Resident, recalled hatching the idea of organising their first ever carnival when some former students in their WhatsApp’s group reminisced about the exciting inter-class activities of school days.

He vividly remembered those days, where they had a gamut of field and court events such as volleyball, basketball, hockey, rugby, soccer, badminton, table tennis and to some extent, tennis.

“So, they decided to go back to school to have this sports carnival. Owing to the age factor, we decided that the football match between the two teams – White and Red – will see each team comprising 20 players as we wanted to have more substitutes in between.

“This initiative not only attracted former students here as we have seen people coming back from KL, KK, Kuching and Miri just for the weekend to participate in the friendly match,” Hii, who is also Sacred Heart Old Students Association (Shosa) president, told The Borneo Post prior to the kickoff of the match on Saturday afternoon.

In the match, the White team captained by Sylvester Wong, thrashed Red team led by Hii with a scoreline of 3-0.

Hii appreciated the kind gesture of the some members from the class to sponsor the full sports attire and even the trophy.

He thus hoped the class of ‘85 could continue to be creative in hosting mini reunions such as this. He also felt that classes from other years would be motivated by this event to organise their own.

On their mini reunions, he pointed out that it has become a tradition of sorts for the class to hold such gatherings in their own towns besides the annual reunion which was held for the second time this year. Next year’s annual reunion has been scheduled for March 31.

Wong, another member of the Class of ‘85, said it was refreshing to harken back to those days when interclass teamwork shaped the competitiveness in them. “But now, it is more about friendship and getting together. A lot of the boys wanted this group to last so they are coming up with events. In this way, we don’t just look forward to reunions, where in between, we have events to strengthen this brotherhood of ours,” added Wong, who flew in from KL for the event.

Jerry Kamijan who flew in from KK, wrote in the group’s WhatsApp: “We are almost 50 (years old), but our brotherhood and bond have never waivered.”

Later, on Saturday evening, the group got together for a mini reunion at a local hotel here with 40 former students, including some spouses. That aside, the Class of 1985 (Form Five) raised RM100,000 for their alma mater last year.