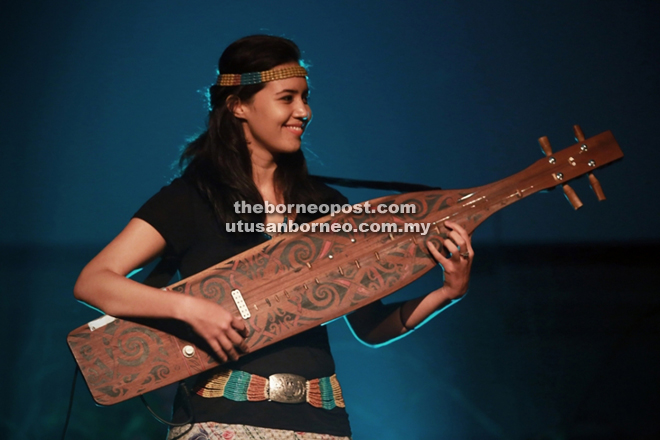 KUCHING: Sarawak’s very own well-known, home-grown talent Alena Murang has been nominated for two award categories in the Buenos Aires Music Video Festival scheduled to be held from from November 27 to 29.

She was nominated for the “Best International Video” and “Best Styling” awards.

Alena’s wonderful artistry and musical talent were showcased in her recent music video, ‘Midang Midang’, which also depicted the colourful and unique fashion styles we have.

The ‘Midang Midang’ music video which was produced by Project Room and Kanid, was launched on Nov 27 last year with the support of Sarawak Tourism Board (STB) and Miri City Council.

The filming was conducted in Bario and Miri.

Another interesting aspect of Alena’s nomination in the Best International Video category is that the nominees will include multi-award winner pop singer Madonna as well as others from all over the world.

“Yes, we are equally thrilled with the nominations that had been given to Alena and her team because it means a lot to all of us in Sarawak when stories about the unique local communities are being shared on international music platforms.

“Alena was right when she said that even during the Covid19 pandemic, the music video clip showing the Kelabit Highlands was still making its way through the prestigious festival and on global stage,” he added.

Abdul Karim said even though the Buenos Aires Music Video Festival 2020 is based in Argentina and would be held virtually, millions of netizens are expected to be following the proceedings on various social media platforms.

He believed this will augur well for the promotion of Sarawak as tourist destination for the future and beyond.

“With over 29,000 views on YouTube, we hope Alena’s music video will continue to become the window for the rest of the world to see how much Sarawak’s tourism has got to offer and to become one of the “must visit” destination once the Covid19 situation has dramatically improves,” he said.