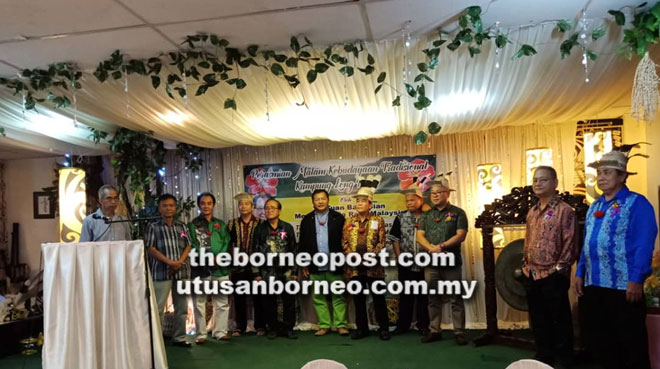 Lusat (sixth right) and fellow villagers stand on stage during a segment of the ceremony. Also seen are Peter (second right) and Philip (third left).

MIRI: A grassroots leader believed that there should be separation between politics and village administration to ensure uninterrupted continuity of progress in any rural community.

Long Palai security and development committee (JKKK) chairman Lusat Tebengang Lalo said as far as his village is concerned, the leadership would want to run an autonomous administration and governance – completely free from the intrusion of any political ideology and dissatisfaction.

“We want our community in Long Palai to focus on progress and development of the ‘kampung’ (village) for the betterment of the people here.

Lusat, who was the event’s organising committee chairman, also called upon all local non-governmental organisations (NGOs) to stop politicising petty and trivial issues; instead, they should join the local community to focus on drawing more developments into Long Palai.

Lusut regarded ‘Culture Night’ as a means to maintain and preserve the customs and cultural heritage of the Long Palai community.

“This is also a thanksgiving dinner, where we seek God’s blessings to treasure and preserve our cultural heritage and also to uphold our unity and close rapport between fellow villagers, friends and those living afar,” he said.