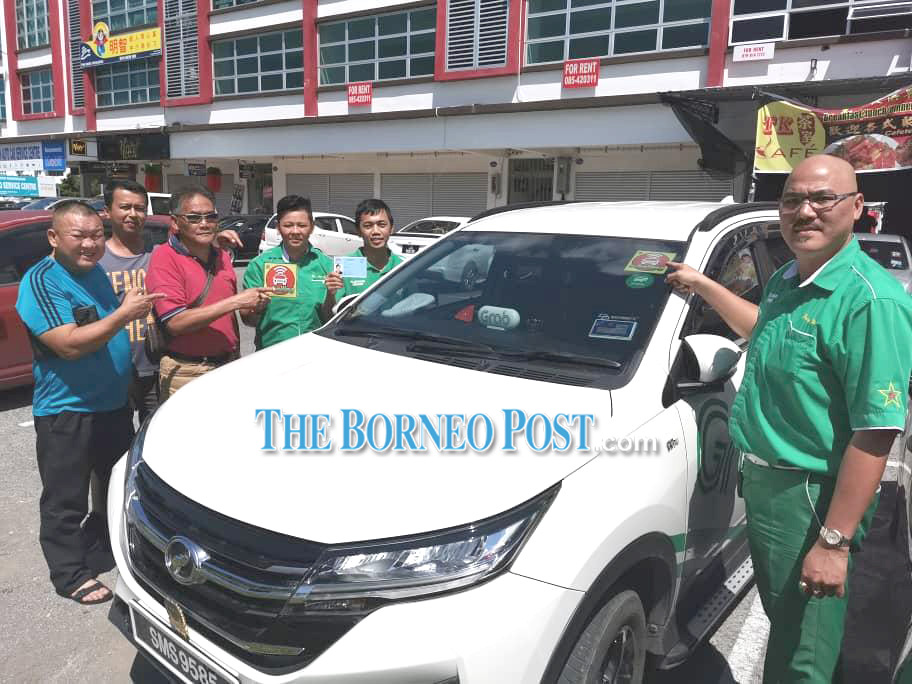 A local Grab driver (right) points at the Puspakom sticker attached on a Grab car.

MIRI: There is a need for more stringent actions against e-hailing drivers who are without the Public Service Vehicle (PSV) licensing.

A local Grab driver who wants to be identified only as Wong, regards letting these non-PSV licensed drivers to operate their services as being very unfair to those who have spent time and money to obtain all the necessary licensing and certifications.

According to him, many full-time and part-time Grab drivers here have sat for online training and written examinations, undergone medical check-ups, obtained e-hailing insurance and Social Security (Socso), and also sent their vehicles for roadworthy verification at the Computerised Vehicle Inspection Centre (Puspakom) – just to qualify for the PSV licensing.

“We have done all that because the Ministry of Transport is regulating the law to ensure the safety of the drivers and the passengers.

“As much as we like to believe that we are abiding by the law, it seems that there are drivers from a certain e-hailing company, who do not comply with this.

The law requires any e-hailing driver whose car is aged three years and above, to affix a special Puspakom sticker on their car.

Wong claimed that the ‘rogue e-hailing drivers’ had not been complying with any of the requirements.

On top of that, he said while this certain e-hailing company was offering cheaper rates that would likely attract more passengers, it was worrying that no other details about the driver and the vehicle affiliated with this company, were displayed on the mobile application.

“Grab requires both the driver and the passenger to have their photos taken for identity verification; this certain company needs none of these.

“What if the driver had a criminal record? Would anyone feel safe when they absolutely have no information about the driver of the car that they’ve booked?” he questioned.

A driver who wanted to be known only as Lung said he worked as a part-time driver with the company for a very short period – he left after realising that safety was not the company’s top priority.