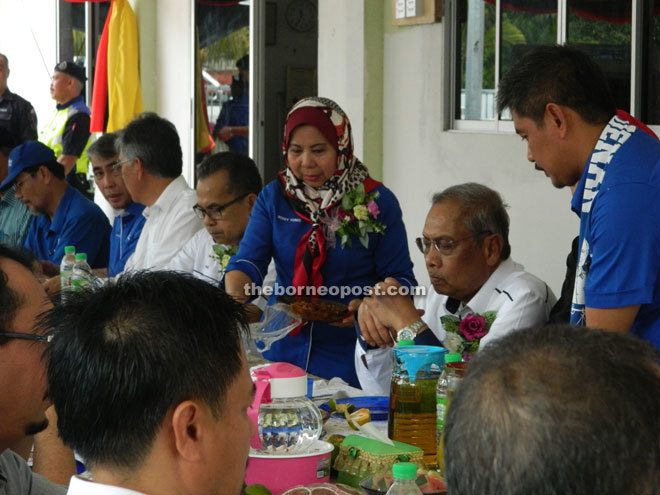 Rosey and Ripin (standing left and right) serving Adenan during the Makan Tahun festival in Bekenu.

BEKENU: Rosey Yunus and Ripin Lamat the respective incumbents of Bekenu and Lambir will retain their posts in the state government if they are re-elected.

This assurance was given by Chief Minister Datuk Patinggi Tan Sri Adenan Satem at the launching of Makan Tahun Perdana of the Kedayan community in Kampung Jambu in Bungai yesterday.

“I want Kedayans to play a role in the Sarawak cabinet and I will not set up a cabinet without any Kedayan representatives,” he stressed.

Touching on opposition and independent candidates in Bekenu and Lambir, Adenan said they would never be able to care for the welfare and needs of the Kedayan community.

He added that he did not want the people to be hoodwinked by promises of independent candidates who claimed that they would be absorbed into Barisan Nasional (BN) if they win.

He pointed out that there were only 82 candidates in BN’s team and any BN party members who contested as Independents would never be accepted back into BN.

“Even if they (independents) win we will never accept them. Those who believe their lies will definitely regret it,” he said.

The chief minister also said he was confident that PKR and PAS candidates would not get much support from voters in Bekenu who are mostly Kedayan.

Meanwhile, 117 Kedayan students who achieved excellent results in UPSR, PT3, SPM and STPM received incentives from the Kedayan Education Fund at the function .