Rosey pays tribute to RTM staff for being role models 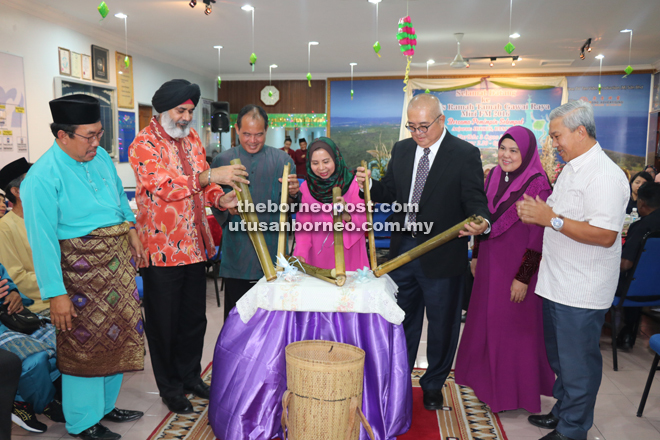 MIRI: RTM staff have been praised for implementing government policies well and promoting solidarity in their work and daily endeavours.

Assistant Minister for Solidarity, Rosey Yunus said RTM Miri, for example, had been actively reaching out to the people through the airwaves and on the ground.

“RTM is just like one big happy family, showing a very good example for others to follow,” she said at RTM Miri Gawai/Raya gathering yesterday.

“Your Gawai and Raya gathering today (yesterday) is a fine example of RTM promoting social solidarity and cohesiveness to create a happy community. You jointly prepared the food on a gotong royong basis for staff and guests.”

The gathering was held at the station’s premises at Brighton Road, and it was attended by staff, media personnel, and representatives from government agencies.

Rosey also paid tribute to everyone who helped the state government to organise Sukma 2016 in Kuching, Sibu and Miri.

She said the state was expecting similar success in the coming National Paralympic Games 2016, to be held in Kuching.

In his speech, Tabad said RTM would be revamping its radio programmes next year to serve the community better.

“Local radio stations of RTM, including RTM Miri, will broadcast state-wide, starting next year to reach out to a wider audience,” he said.

“This way, we can continue to stay relevant, as currently we faced stiff competition in both radio and television programmes, especially with wide use of the internet and other modern technology”.