RM6.2 bln worth of Sarawak-centric projects on track 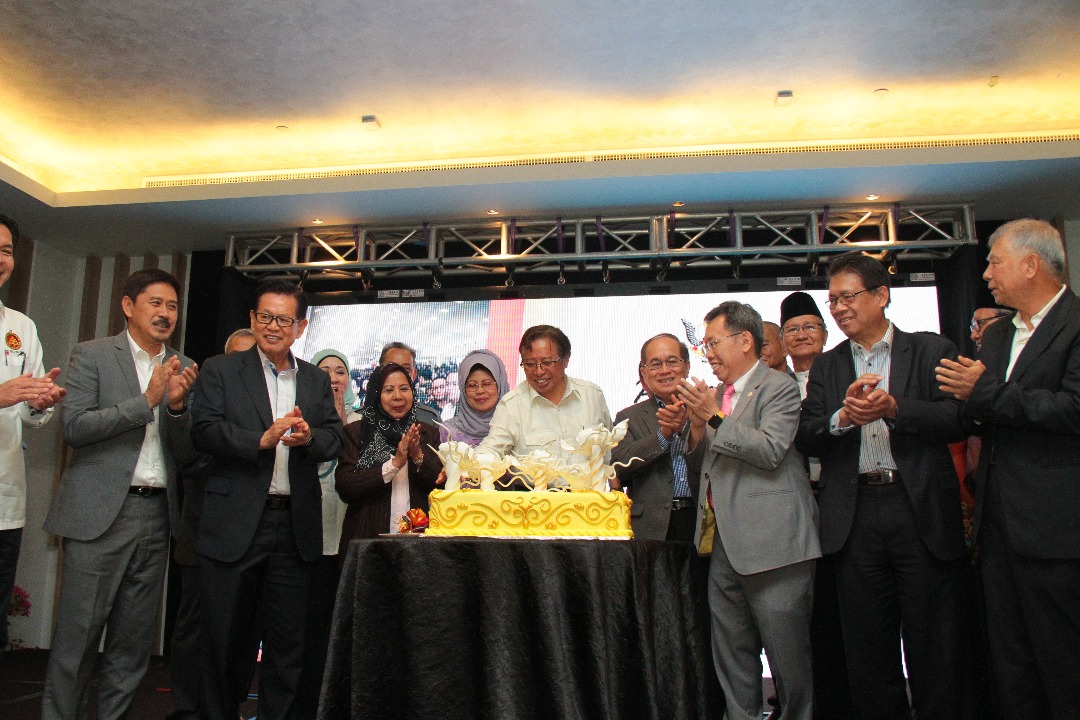 Abang Johari (centre) flanked by Fatimah on his right and Douglas on his left cutting the cake to commemorate the second anniversary of his appointment as chief minister as others cheer at the launch of the ‘For Sarawak 65 initiatives-Team Abang Jo’ event.

MIRI: The 324 Sarawak-centric projects initiated by the GPS State Government spearheaded by Team Abang Jo are on track and this positive revelations augurs well for the people looking forward to better infrastructures, utilities, agriculture and housing in the state.

Chief Minister and chairman of GPS Datuk Patinggi Abang Johari Tun Openg gave the thumbs up to the delivery of RM6.2 billion worth of projects which are in different states of implementation.

“It’s on schedule, the RM6.2 billion projects include Rural Transformation Projects (RTP) and other basic amenities for the rural people, including RM2.8 billion for rural water supply and RM2.37 billion for rural electricity supply projects, “ he said.

Abang Jo made this announcement on the first day of his third year as chief minister since his appointment on Jan 13 two years ago.

According to Abang Johari, the big-ticket projects such as roads and bridges are all underway, some still in feasibility studies while others with construction already begun.

“These major projects, which would create big impact, include bridges across Batang Lupar, Batang Lassa, Batang Rambungan and Batang Kemena,” he said.

He explained that the projects were considered big ticket items as the modernisation of transportation logistics with coastal roads and bridges infrastructure development will raise rural connectivity that would complement the ongoing Pan Borneo Highway in opening up new areas of economic growth through modern technology-aided agriculture.

The rural air transportation of cargo and passengers will take flight with the construction of airports at Sadok, Spaoh in Betong and Bukit Mabong District in Kapit which covers the whole of Baleh state constituency, with the Tunoh new township slated to be the district’s administrative centre.

Abang Johari also announced the new affordable housing programme of the state government rolling out between 2,000 to 2,500 units of affordable houses priced between RM90,000 to RM150,000 in the state this year.

The state government will subsidise a third of the cost and Mutiara Mortgage and Finance company will be allocated seed money to kick off financing packages for the target group of low-income house buyers under this programme.

Abang Johari said the state government undertook this initiative as the RM300,000 asking price for affordable houses according to the national Ministry of Housing and Local Government is beyond reach for the target group in Sarawak.

Earlier on, the chief minister launched the booklet containing the 65 initiatives which he has spearheaded under ‘Team Abang Jo’ in the state government since taking over as the top post from the late Pehin Sri Adenan Satem following the later’s demise on Jan 11 in 2017.

The initiatives ranged from championing the state rights under Malaysia Agreement 1963 (MA63) to new economy under Industry Revolution ( IR) 4.0, rural transformation and a slew of others which adds to 65 in the past two years, which were listed in the booklet launch yesterday.

The booklets were later presented to government officials and community leaders.