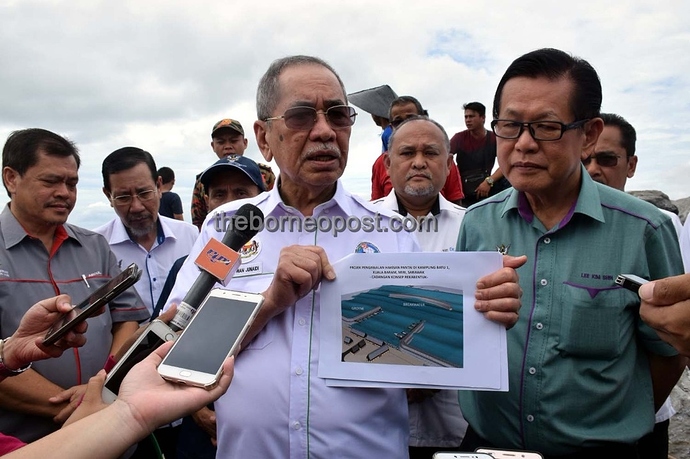 Wan Junadi showing the artist’s impression for the RM25 million marina concept project at Kampung Batu Satu in Kuala Baram and standing on his left is Lee.

During his official visit to the village fish market here today, Wan Junaidi, who is the MP for Santubong announced an allocation of RM25 million marina concept project to upgrade and beautify the fish market area.

Speaking to media in an interview, he said the project, which is aimed at controlling the coastal line erosion in the area, would be the first of its kind in Sarawak.

“The concept of this project has been done successfully at Peninsular Malaysia. We brought the success models from Dungun and Besut in Terengganu.”

He also said that the project for the fish market at the village would be similar with those in Peninsular Malaysia.

Thus, Wan Junaidi said he was looking forward to the project which would be an icon project for the rural areas in Sarawak.

He said the tender for the three-year-project would be called around March, next year and expected the construction work to commence in June in the same year.