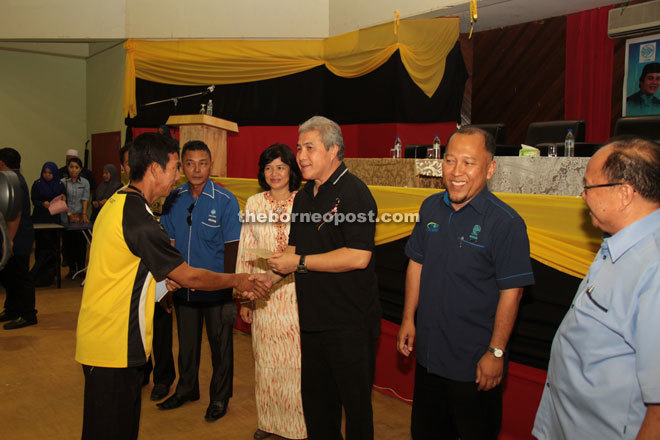 Awang Tengah (centre) presents the living allowance to one of the recipients.

LAWAS: The government has allocated RM113.5 million as living allowances for fishermen across the state since 2008, including the RM14.78 million disbursed last year.

Second Resource Planning and Environment Minister Datuk Amar Awang Tengah Ali Hasan said the pay-out, together with 1Malaysia People’s Aid (BR1M) and other assistance, underscored government’s commitment in lessening the burden of the people who had to face higher costs of living.

In the case of local fishermen, the allocations signified the vital role played by this group in the country’s economy.

“Three years ago at a chief ministers’ conference where I was representing Sarawak, I insisted that the living allowance for fishermen must be continued; the Prime Minister immediately agreed to the proposal,” he said after presenting the allowance to 850 fishermen — registered under Lawas Zone Fishermen Association — at the district indoor stadium yesterday.

Awang Tengah, who is also Industrial Development Minister, pointed out that under the 2015 Budget, the allowance had been raised from RM200 to RM300 monthly for every Category A fisherman, and RM250 for those under Category B, C and C2.

On the scheme that provided assistance in the form of fishing gears and equipment, he urged those yet to be included as recipients to be patient, assuring them that the names had been submitted to Deputy Prime Minister Datuk Seri Dr Ahmad Zahid Hamidi during his last visit here earlier this year.

On another note, Awang Tengah conveyed his appreciation to the fishermen for their support towards Barisan Nasional (BN) all this while and called upon them to continue to stand behind the coalition in the coming election.

“Do not let any personal difference or dislike stand in the way of your unity towards supporting the BN, as this election is a crucial matter — in that you will be electing the next state government that will impact your future.”

He acknowledged that members of Lawas Zone Fishermen Association had been benefitting from numerous assistance slated towards improving the livelihood of fishermen.

These, he pointed out, included the setup of new jetties and markets, loan facilities, provision of fishing gears, subsidised fuel and living allowance.

“I hope that the housing programme for fishermen would also be approved for the community in Lawas, in addition to the house repair projects,” he said.