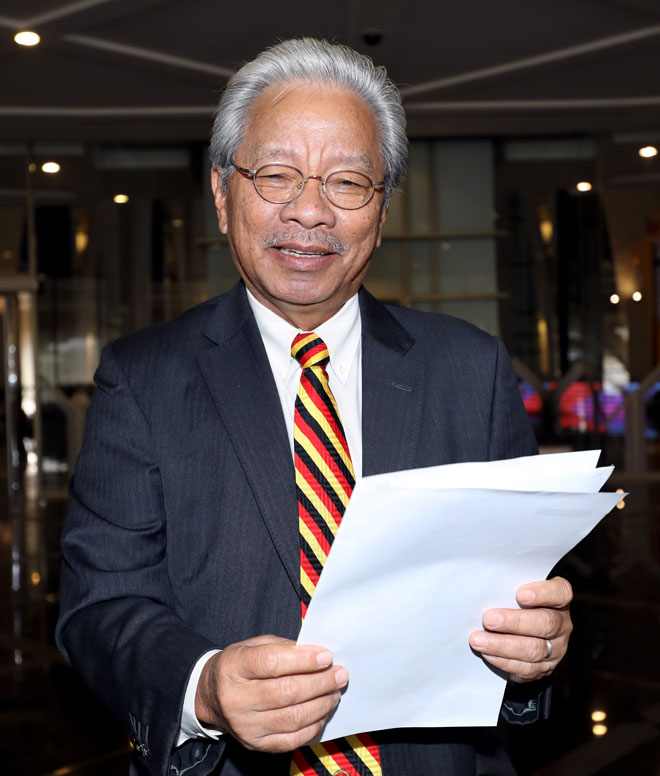 Masing poses for the camera before delivering his ministerial winding-up speech.

KUCHING: River transportation is not a sunset industry, the State Legislative Assembly was told.

Infrastructure Development and Transportation Minister Tan Sri Datuk Amar Dr James Jemut Masing, who is also Deputy Chief Minister, revealed that as of end of July this year, the number of passengers travelling on registered boats recorded by Sarawak Rivers Board (SRB) was approximately 1.4 million whilst cargo handled at wharves was reported to be nearly 160,000 tonnes.

“These figures indicate that river transportation in Sarawak is very significant to the economic development of the state, especially in the rural areas,” he said in his winding-speech at the august House yesterday.

On the Rural Air Service (RAS), he said it still plays a vital role as a mode of transportation, especially in some remote areas, although road connectivity is constantly being improved.

“With the availability of RAS services, marketing and delivery of agricultural products will be more efficient, while at the same time boosting the domestic tourism sector,” he said.

In order to make MASwings more financially sustainable, he said there is a need for MASwings to adopt what other airlines have been practising, which is to penalise passengers who have booked the seats but failed to turn up.

On the current shipping industry, Masing said the trend is towards bigger vessels to gain economy of scale.

“Bigger vessels therefore require deeper draught. This is what our state’s ports do not have. Thus, it is an opportune time now to consider investing in the expansion of the existing ports to become deep-sea ports. Although it would initially cost billions of ringgits, along the way it would generate a high income economy for Sarawak,” he said.

He said his ministry would seriously look into the study and planning to develop a deep-sea port at Tanjung Po as the main gateway to the southern region of Sarawak; relocating Miri Port to the sea off Kuala Baram estuary; and rejuvenating the business focus of Tanjung Manis Port Authority and Rajang Port Authority in serving the central region and upper Rajang basin.

He also disclosed that port authorities shall re-align their business strategies toward optimising the utilisation of port infrastructure and facilities to enhance port delivery performance, application of new technologies and improving work processes to synchronise with the government’s push for development of digital economy.

To enhance navigational safety and security in Sarawak waters, Masing said the government could draw on the practice and experience of Port of London Authority which had implemented the Vessel Traffic System (VTS).

He said the increasing threat levels from the Sulu Sea or elsewhere made it necessary to deploy modern VTS technology to monitor, detect and transmit information, thus enabling protective measures to be taken immediately by enforcement authorities.

He said the VTS Port Control Centre will be constantly in communication with the ships via VHF radio and could inform the maritime police if there is any breach of security threat besides providing navigation, weather and tidal information.

“The system can be used for surveillance, passage planning and tracking movement of vessels as evidence of what actually happened if and when there is an incident while the CCTVs provide visual monitoring.

“It is therefore important that the state’s ports; namely Kuching, Rajang, Tanjung Manis and Miri need to set up their own VTS Control Centre, and request funding from the federal government,” he said.