The selloff in Asian emerging market currencies intensified with the Indian rupee plunging to a new life-time low, while the Indonesian rupiah fell to its weakest level since April 2009, the Thai Baht at its lowest since April 2012, and the Malaysian Ringgit at its most vulnerable since June 2010. This came amid concerns over how these countries will cope when the U.S. Federal Reserve begins withdrawing its stimulus measures.

Singapore and Hong Kong remain stable after posting better-than-expected GDP growth. The Sing dollar was relatively flat in recent weeks, while Hong Kong has pegged its currency to the U.S. dollar since 1972. By that, a strengthening greenback also means a stronger Hong Kong dollar. Investors pulled out their investments en masses across emerging Asia in anticipation of the quantitative easing cutback by September. For the past four years, American stimulus program has been fueling Asian asset bubbles.

Capitals that have not been repatriated back to America or Europe are concentrated in China. Last week, the Chinese Yuan hit an all time high against the dollar. The Filipino peso was able to hold ground after reports showed a strong-than-expected consumer spending that continues to power the 100-million economy. Philippines became the fastest growing major Asian economy last quarter after posting a 7.8 percent growth, compared to China’s 7.7 percent. Elsewhere, India, Indonesia and Malaysia are slowing down, while Thailand is in recession.

In Japan, where the government has been attempting since last year to devalue its currency so to enhance export competitiveness, the yen actually rises. Both the Chinese and Japanese currencies, along with Taiwan and Singapore, are now among the most stable in Asia, but this has spurred concerns from local businesses. The four are all export-oriented economies and surging currencies could erode their competitiveness. The Korean Won slide to a 2-week low over outflows worries. 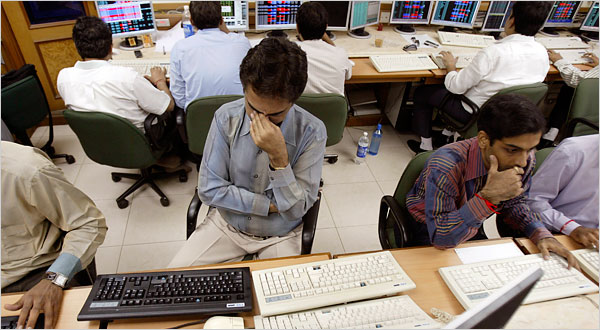 India in danger of a total market chaos

The sell-off is the most severe in India, where the rupee remains locked in a downward spiral, falling to a fresh record low against the greenback of INR64.11. Analysts warned that if this is not contained, India may plunge into a total market chaos. The Indonesian rupiah also felt the pain, slumping to a four-year low of IDR10,700 against the dollar, before the central bank intervened to support the currency, dealers said. “It is very difficult to get dollars with only state banks providing,” said a Jakarta-based trader. “If the current conditions continue, it is very probable for 10,700 to be broken.”

The Thai baht weakened to a one-year low, as the country becomes Asia’s first in several years to enter recession. The baht now fetches only 31.65 per dollar as foreigners sold local stocks seeking dollars, while real money and macro funds also offloaded the currency. “The baht is on a weakening path since yesterday’s second-quarter GDP was below expectations,” said a Thai bank trader in Bangkok, adding that it could fall to 32.00.

The Malaysian ringgit fell to 3.3005 to the dollar. It managed to stabilize at 3.3000 in the short-term as the central bank, like Indonesia, is defending the currency, though in general traders expect further weakening. “The best thing is not to short the dollar as outflows from this region are continuing,” said a senior Malaysian bank trader in Kuala Lumpur. The ringgit has a support level at 3.3345, breaching that will see further weakness on the currency.

http://www.fairobserver.com/sites/default/files/imagecache/featured/us_federal_reserve_system_international_currencies_gold_standard.jpg
US: You have to understand that I’m still in firm control of the world’s finance

oh no!!!
banks financial consultant who sell lots of bond papers/closed-ended investments/structured deposit which are in AUD and IDR will get lots complaints from their customers!!! their money with lower value than before get stucked!!!

Ringgit weakened…how r we goin to get out from this country to have a nice n safe holiday???

[quote=“lyn.lyn”]oh no!!!
Ringgit weakened…how r we goin to get out from this country to have a nice n safe holiday???[/quote]