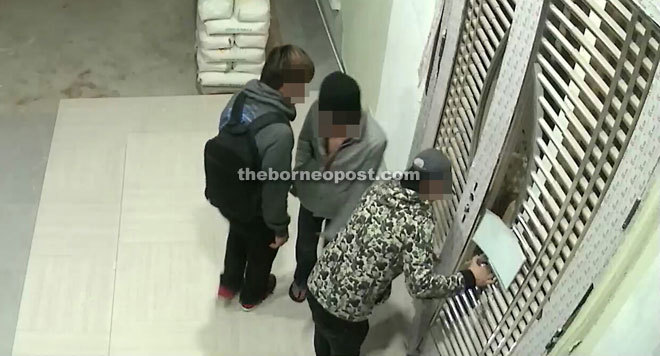 A shot from the CCTV footage shows three suspects trying to break into his house on Monday.

MIRI: A 42-year-old businessman lodged a police report yesterday urging the police to patrol his neighbourhood more often as there were several attempts to break into his house by unknown individuals on Monday.

He said several attempts were made by three unknown individuals to break into his house at Jalan Tanjung here as recorded by his closed circuit television video (CCTV) footage about 9.50 on Monday.

He however although the trio failed in their attempt he made the report nevertheless for fear that they would come back again.

He also said he had lodged a report on Jan 9 after his house was broken into.

He suffered more than RM11,000 in losses in that incident after several items including compressor, concrete breaker, grass cutting machine and two wood cutting machines were carted away.