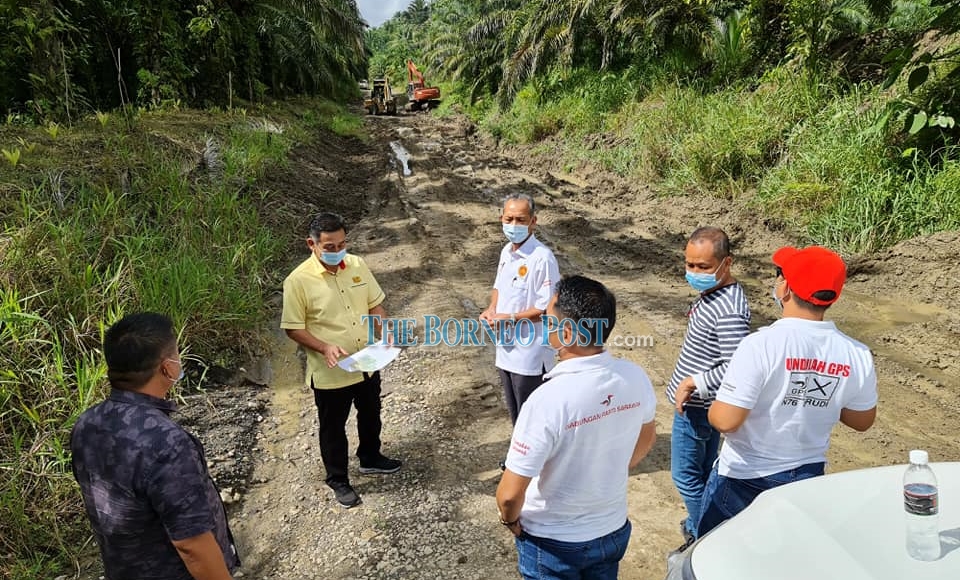 Penguang (second left) checks on the progress of the repair works being carried out by PWD Miri on the Long Lapok-Ulu Tinjar road yesterday.

MIRI (Feb 21): Repair works on the Long Lapok-Ulu Tinjar road which has been damaged since December last year have commenced over the weekend, said Marudi assemblyman Datu Dr Penguang Manggil.

Penguang who went for a site visit to the area with engineers from Miri Public Works Department (PWD) yesterday, said the improved weather conditions over the last few days had enabled the machineries to start carrying out the repair works.

“I went to check on the progress of the repair works currently being done by PWD Miri with a special allocation amounting RM700,000 which had been approved by the Chief Minister Datuk Patinggi Abang Johari Tun Openg in December last year.

“The repair works commenced immediately after the improved weather when compare to last month,” he said when contacted today.

He stressed that the repair works were a short-term solution to the problem to enable the villagers and vehicles using the road to carry out their activities.

Penguang, who is also Assistant Minister of Local Government added that he would also request for additional funding to repair other parts of the damaged road.

Penguang also revealed that the chief minister had agreed to speed up the implementation of the road upgrading project from Lapok Junction to Long Tisam during a meeting with the latter on Feb 17.

Thus, he said a meeting to discuss the coordination of the project would be carried out soon.

“Hence, the issue which had been circulating among the community that the funds for the upgrading road have been withdrawn or cancelled is not true.

Due to the damaged road, the people in the area had to leave their car at Lapok Bazaar and use a “perahu tambang” to get to their longhouses besides not being able to transport their agriculture products which had great impact on their daily lives.