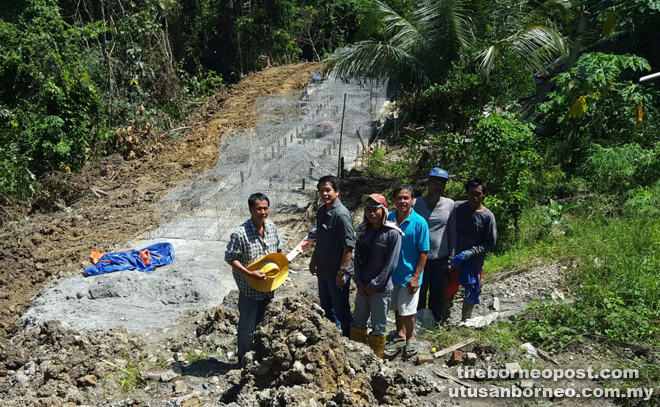 An erosion control project at Long Pilah in central Baram where the funds allocated were insufficient.

MIRI: Telang Usan assemblyman Dennis Ngau has called on Prime Minister Datuk Seri Najib Tun Razak to constantly meet members of Parliament and state assemblymen from rural constituencies in Sarawak to get feedback and monitor the progress of pledges made by the latter and Barisan Nasional (BN).

Dennis was particularly referring to Budget 2017 which Najib announced last Friday, saying it must benefit the rural people, who should be the target group.

“Otherwise, the Budget will only remain a budget if it doesn’t bring any benefit to us in the rural areas,” he said.

He said he longed to meet the prime minister to tell him of ‘the actual picture on the ground’.

“I am looking forward to see PM personally to beg for his special attention for Telang Usan – clean water, electricity and better telecommunication are very much needed in my ‘kawasan’ (constituency),” he told The Borneo Post.

The two-term assemblyman said Telang Usan, being a rural constituency, needed more funds for roads and suggested that the government use the resources of logging companies operating in the area to build the roads to save cost.

Under Budget 2017, RM1.2 billion is allocated for building and upgrading 616 km of village roads and bridges besides street lights at crossroads for 7,500 villages nationwide