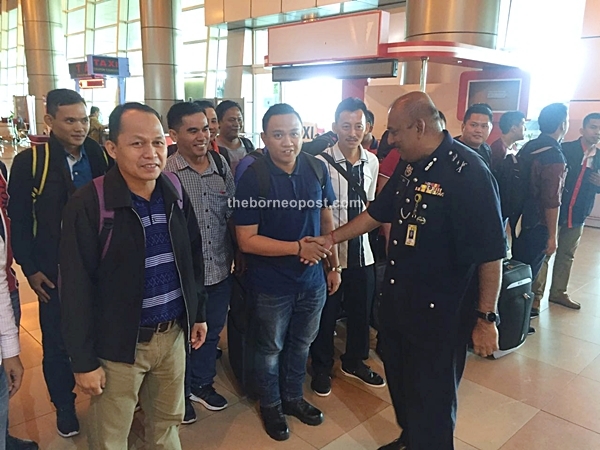 Dev (right) greeting the first batch of police personnel as they arrive at Kuching International Airport.

KUCHING: Police in the state will receive the first batch of manpower assistance from Peninsular Malaysia for the state elections today (April 19).

As soon as they arrive, they will be brought to Sekolah Latihan Kota Sentosa for registration before being taken to their respective districts, according to a statement from state CID chief SAC Dev Kumar.

A total of 195 officers and men will arrive in four separate flights. They will be received at the airport by the state CID Elections Secretariat and district CID chiefs. These 195 personnel will be deployed at 10 districts in the south zone and also at the CID HQ.

Over the next few days, more manpower for the CID will arrive in Sibu, Miri and Bintulu.

A total of 1,162 CID personnel will be deployed throughout Sarawak during this election period. 555 of them will be from Peninsular Malaysia. Apart from this, 85 personnel from the state Narcotics and Commercial Crime divisions will also be roped in to assist the CID during this period.

The primary role of the CID during this election period will be to investigate election offences, monitor election rallies and social media postings.

“Although we do not foresee any untoward incidents, we are not taking things for granted. We expect candidates and supporters to be on their best behaviour. Netizens are also advised to act maturely and avoid posting unwarranted comments that could land themselves in trouble with the law” said Dev.