RapidKL may operate in Kuching if there’s request — COO 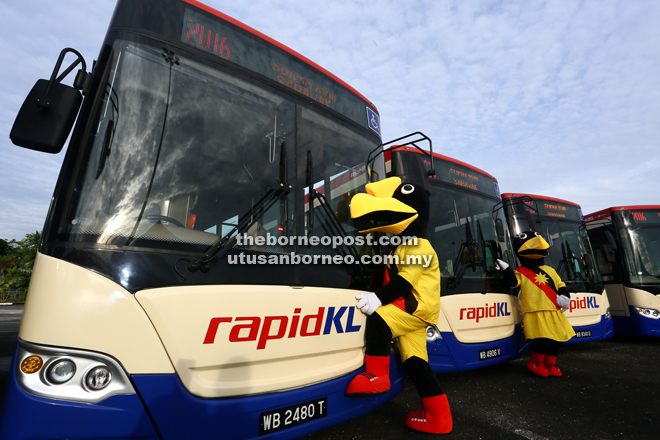 Sukma 2016 hornbill mascots Satria (left) and Satrina posing with the RapidKL buses after the handover ceremony at the Pending Port yesterday. — Photo by Muhammad Rais Sanusi

KUCHING: Depending on the needs of the state, RapidKL might consider spreading its wings to Kuching. Its chief operating officer (COO) Mohd Azam Omar said the company would be most delighted to provide its rapid bus services to Sarawakians, should they be invited to do so.

“It depends on the needs of the state and the people. If we are asked to do so by the state government, we certainly welcome the idea and will be most honoured. The criteria for us to start operation anywhere is simple. It is to be able to meet the needs of people,” he said yesterday after the handover ceremony of 25 RapidKL buses to the state government for use during Sukma 2016 this month and the National Paralympics Games early next month. He was asked on the possibility of having Rapid bus services in Sarawak.

On a related matter, he said RapidKL was looking forward to cooperating with the state government in major events that might require their services.

On the 25 buses to be used for the sporting events, Mohd Azam said it was up to the Sukma Secretariat to decide on how to use them.

“We have already handed over the buses to the state government so technically it is up to them to decide on the usage,” he said, adding that the buses will only be sent back to Kuala Lumpur after Aug 12.

Mohd Azam also informed that five of the 30 bus captains were already in Kuching, while the others would arrive soon.

“The bus captains will be assisted by the Road Transport Department (JPJ) and auxiliary police to familiarise themselves on the roads and to ensure smooth operations during their time here. We hope our contribution will provide much convenience to the athletes and officials, and to make Sukma 2016 a great success,” he said.