Happy, glorious and soaked, Britain today concluded its four-day celebration of Queen Elizabeth II’s Diamond Jubilee with the roar of cannons, jets and the jubilant “God save the queen!” cheers of a crowd of more than a million adoring Brits greeting the Queen and honoring her 60 years on the throne. 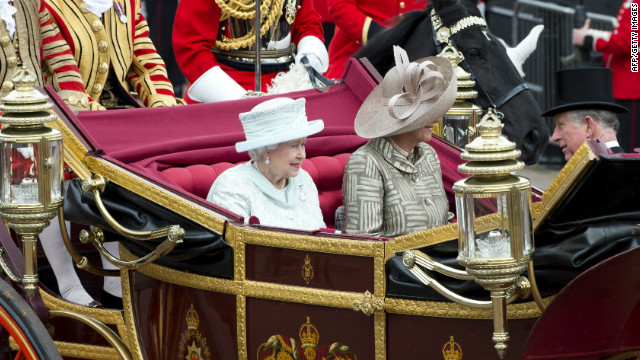 It was the second-ever royal diamond jubilee the UK has seen, with the first being that of Queen Victoria 115 years ago. But as Britain celebrates, harsh realities set in to remind her how far things have changed in the past century.

In 1897, when Queen Victoria marked the 60th year of her reign, it was triumphant festival of the empire, a celebration to showcase the British empire “at its zenith”. At the time, Victoria reigned over a quarter of the world’s population and Britain was a global superpower.

In Victoria’s era, the empire came to London. The British Prime Minister Joseph Chamberlain invited 11 colonial ministers of the self-governing colonies to be present, along with some Indian princes, and representative colonial military detachments to be part of the jubilee procession.

Indian lancers wearing turbans, mounted troops from New Zealand, Jamaican gunners, and even Arabian camels paraded in front of Buckingham Palace on June 22, 1897, which was declared a public holiday. An impressive display was captured in grainy footage on short black-and-white films.


Queen Victoria’s diamond jubilee - a global empire at its height

More than a century later for Queen Elizabeth II’s diamond jubilee, there is no equivalent participation from the Commonwealth or its 15 other realms where she is the head of state. The empire has changed in her lifetime, it disintegrated.

In 1897, the jubilee was celebrated with splendor across the empire, where sumptuous events were organized. Town clocks honoring Queen Victoria were erected in Malaya and New Zealand, and fountains inaugurated in Seychelles.

The diamond jubilee of Queen Elizabeth II, however, is much more a celebration of British history, her reign and the British royal family. There is little celebration taking place over the jubilee weekend in the other 53 countries who were once former British colonies, with the exception of Canada. Not even Australia and New Zealand where the Queen is the head of state.

In Australia, Sunday’s diamond jubilee pageant on the River Thames, the biggest spectacle of the weekend’s events, was not transmitted live by the Australian Broadcasting Corporation on its main free-to-air channel. It scheduled the 1975 film “Shampoo” instead. What’s remain of the empire today

Four years after her diamond jubilee, Victoria died in 1901. The following decade would see the United States eclipsed Britain as the world’s leading economy and Germany marched ahead of the UK in industrial production. Britain later, although victorious, was crippled in World War 1, ironically by the doing of Kaiser Wilhelm II, the German grandson of Queen Victoria. From that time onwards, it was no longer an unrivaled industrial or military power.

World War 2 effectively brought down the British empire, the fight with Japan and Germany weakened the UK to such extent that it could no longer hold on to the empire. The occupation of its South-East Asian colonies by Japan severely damaged British prestige and accelerated the decline of the empire. India, Britain’s most valuable and populous possession, went independence two years after the end of the war.

With the handover of Hong Kong to China in 1997, many of those in attendance of the ceremony, including Prince Charles, marked “the end of Empire”. Since then, British global influence has been waning. At world stage, the spotlight is now focused on the US and China, with Britain a 2nd-tier power. Even within Europe itself, the UK has been overshadowed by a more economically powerful France and Germany, with the duo dominating much of EU affairs.

The diamond jubilee comes as Britain was hit by economic recession and a 8.2% unemployment rate. Once the ‘workshop of the world’, the UK manufacturing has pretty much all been lost to Asia. As Elizabeth II led the spectacular 1,000-boat flotilla with around 1.2 million braving the rain to show their support, the Britain today is no longer the same as the Britain in the past.

British Empire though, left a wide legacies. The English language is today the primary language of up to 400 million people, and the world’s dominant business language spoken by about one and a half billion. The English parliamentary system served as the template for the governments for many former colonies, and English common law for their legal systems. British colonial architecture continues to stand in many cities that were once part of the British Empire. The British choice of system of measurement, the imperial system, continues to be used in many of its former colonies in various ways. The convention of driving on the left hand side of the road has also been retained in much of the former empire.