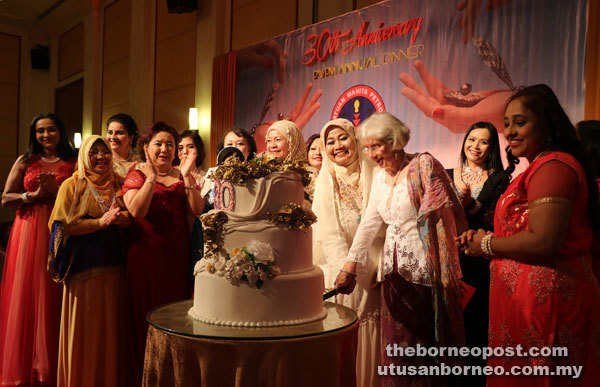 Mary (third right) and Cranfield cutting the anniversary cake as past presidents and current exco members look on.

MIRI: The Miri Petroleum Ladies Association (PWPM), which celebrated its 30th anniversary with a gala dinner on Nov 12, was challenged to go international in championing its objectives of promoting universal peace.

Its founder and first president (1986-87), Mary Jaya, threw down the challenge during her speech before 170 members and invited guests from 20 countries.

“It’s amazing that PWPM is very successful and active, full of enthusiasm doing so much good works for the community and the members, but I really would like you to go international to help address the world’s problems as there is not only intolerance among races but people are looking at different countries and having the wrong impression,” she said.

She suggested that PWPM connect with other groups with similar goals and activities in other parts of the world, to share ideas and spread awareness of their respective countries and also their cultures.

“Much needed to be done by more people as the world’s , problems are growing at an exponational rate – in every corner there is war, anger frustration, and we just need happy people like PWPM members to connect with one another and combat this very negative atmosphere,” she emphasised.

Current president Srimurniyati Cranfield in her welcoming speech assured those present that PWPM will be true to its main objectives of not only promoting universal peace but also promoting cross-cultural exchanges.

“PWPM has always focussed on reaching out to the public, sharing valuable knowledge and working together to raise funds to help the less fortunate,” she said.

Cranfield added that despite being without premises for three years, PWPM managed to successfully hold many activities. She thanked members for their strong cooperation.

Among the activities organised by PWPM were the recent Asean open house held in conjunction with this year’s Malaysia Day and Indonesian Independence Day, in addition to weekly activities like craft-making, dancing and cooking demonstrations.

Meanwhile, besides enjoying the food, attendees of the 30th anniversary dinner were entertained with various performances including singing and dancing – all by PWPM members and guests.

Among them were Malaysian and Bollywood dance medleys, Filipino and Indonesian dances, a Scottish dance, and the all-time favourite – ‘poco-poco’.

Mary and a number of PWPM’s past presidents, including Sandra Bunyak and Rose Kinajil, as well as invited guests, Rita Lau (Miri Mayor Adam Yii’s wife), Liz Durkin (wife of Sarawak Shell Berhad managing director Simon Durkin) were among those who gladly joined in the open floor dance session.

Besides an anniversary cake-cutting ceremony to mark the occasion, lucky draws were also held.

PWPM is a non-profit non-governmental organisation that was registered on Nov 12, 1986, with membership open to all women aged 18 and above.

Initially, it was founded to bring together the wives of those working in the oil industry, including Shell, Petronas and other oil-related companies.