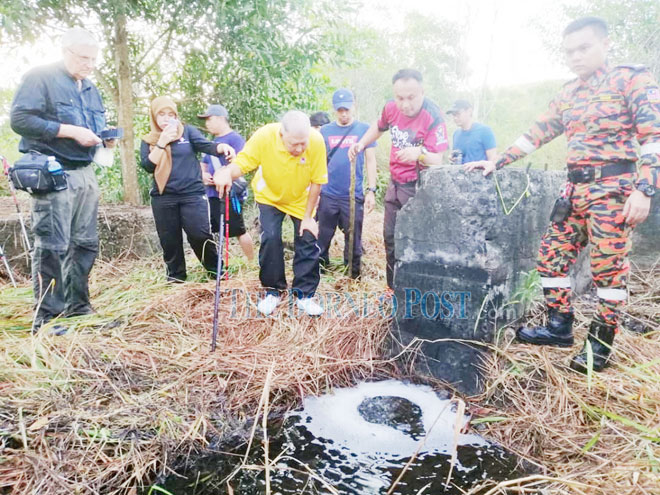 (Front from left) Carter, Ting, and others check out one of the liquefied gas spots.

MIRI: Members of the public have been told to stay away from the locations where liquefied gas has been found on Canada Hill.

Assistant Minister of Tourism, Arts and Culture Datuk Sebastian Ting said the areas have been sealed for safety reasons.

“We went to two old land wells, Well No. 547 and Well No. 64, and before reaching these two locations, we could smell a strong diesel-like odour from afar.

“When we approached the place, gas was bubbling from water, and oil was seen floating on the surface of the water. While samples have been taken to investigate the attributes of the gas, it is best for the public to stay away to prevent unwanted incident,” he said during a visit yesterday.

Ting said each of the 550 land wells on Canada Hill were drilled in different years.

“Amongst the wells, Well No. 266 could possibly have been drilled around 1926 or earlier; whilst Well No. 505 could possibly have drilled somewhere in 1930 or later. These are some of the interesting findings about Canada Hill, and I believe there are more that explain Miri’s history than just the Grand Old Lady,” he said.

Ting suggested Canada Hill be developed into a geological park to preserve the area for educational purposes.

“The discovery has been relayed to Chief Minister Datuk Patinggi Abang Johari Tun Openg and representatives of Petroleum Sarawak Berhad (Petros), and I believe action will be taken on the matter,” he added.

Ting also pledged to work with retired geologist Rick Carter, who was former chairman of the Sarawak Society for Petroleum Engineering, on the proposed geological park.