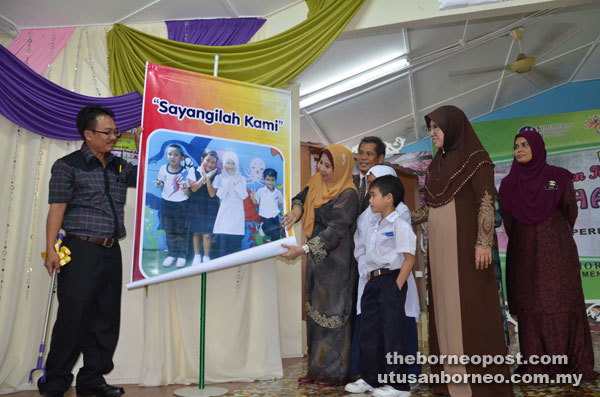 Rosey unfurls the banner when officiating at a Children Safety Campaign at School called ‘Wise Kid’s Zone: Safe and Protect’ witnessed by Majanah (first row right), Abdul Aziz (standing behind Rosey) and others.

MIRI: Emergency drills to prepare for an earthquake-triggered tsunami should be included in school and public safety programmes.

Assistant Minister for Solidarity Rosey Yunus said such effort would teach people how to respond to future tsunamis.

“Though no earthquakes have been reported in our country, we have to be equipped for the unpredictable in view of world climate changes.

“Thus, we should have an integrated public safety programme to teach people how to deal with other natural disasters,” she said when officiating at a Children’s Safety Campaign at School – Wise Kid’s Zone: Safe and Protect’ at SK Anchi’s Sri Gemilang Hall yesterday.

Other than fire drills, equal attention should be given to other emergency preparedness, pointed out Rosey who is also Bekenu assemblywoman.

“If we cannot conduct such emergency exercise frequently, at least teach the people, including school children, how to deal with natural disasters.”

She called on the community to cooperate in the campaign for children’s safety in school, at home and in public places.

“We should play a role to safeguard the safety of children under our care. Thus we need to be more particular on the matter related to child safety particularly those we tend to ignore such as the fastening of seat belts, providing child car seats, and many others.”

In addition to that, she expressed her concern for children abducted while waiting for their parents at bus stops outside the school.

To avoid this, she suggested the school assign at least one teacher to make sure children are fetched by their parents or guardians after school.