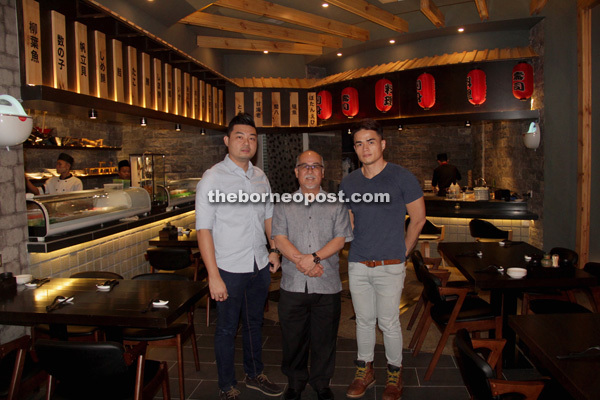 Ting (left), Phan (right) and their mentor Liew at the newly extended section of their restaurant.

KUCHING: There are in fact many Japanese restaurant types, contrary to the stereotypical belief that Japanese cuisine is limited to sushi and ramen joints only.

One of the most popular restaurant types among the Japanese is the izakaya, which is a drinking establishment that also serves a variety of small dishes, such as robata (grilled food), yakitori (chicken/meat skewers), salads and other finger foods.

This term, consisting of “i” (to stay) and “sakaya” (sake shop), indicates that izakaya originated from sake shops that allowed customers to sit on the premises to drink.

The concept is gaining popularity worldwide, and izakayas everywhere are a popular place for after-work dining and drinks.

Two young local entrepreneurs Brendan Ting and Owen Phan, in partnership with Dato Patrick Liew and other entrepreneurs are now bringing this concept to Kuching by establishing a premium Japanese restaurant – stylised as iZakaya – located at Icom Square.

Thirty-four-year old Ting – a civil engineer by training – and 30-year-old Phan – a chef specialising in Japanese food – said it was their dream to open a premium Japanese restaurant to tap into the niche market for authentic Japanese cuisine.

They had previously worked together to set up a ramen joint, but iZakaya is a bigger venture as they are serving a larger clientele with a wide variety of food, including set dishes for the lunch crowd.

With many locals having already visited Japan for holidays or business, they believe there is now greater awareness and appreciation of Japanese cuisine and its preparation and methods of cooking, of which its health benefits are attributed to Japan’s high life expectancy.

“More people are getting influenced by the Japanese lifestyle, which emphasises discipline, cleanliness and healthy eating,” said Ting, who is in charge of operations and

the interior design of the restaurant.

Just like the conventional izakaya, he said the restaurant has several seating options, which include traditional Japanese-style tatami mats with low tables, regular dining tables and chairs or bar seats.

Phan, who is in charge of the food and beverages, said Japanese food lovers in Kuching can look forward to relishing the wide range of flavours from the Land of the Rising Sun, from appetisers to fresh flown sashimi and all kinds of beverages.

“Here, you get to enjoy freshly imported wagyu beef, unagi (eel) dishes, kampachi and other seafood dishes. There are also Japanese-styled salad dishes, in addition to a wide array of sashimi and ramen dishes,” he said.

For salmon lovers, he said they can get to enjoy grilled salmon head teppanyaki (hot plate) style glazed with sea salt. They can also enjoy salmon belly, fried salmon skin and even crackers made of salmon fries which go well with drinks at the bar, he added.

“The best and healthiest parts of Japanese cuisine have a lot to do with the way food is consumed: in a moderate portion, and with lots of variety,” said Phan.

Under the mentorship of Liew as iCube’s founder and chairman, their restaurant was expanded by 1,000 sq/ft to 4,600 sq/ft to include a teppanyaki section, which is believed to be the first in Kuching, if not in Sarawak.

Liew said the iZakaya concept was so successful that there were now plans in the pipeline to expand the brand to Miri and Bintulu.

He was happy that the feedback has been very good, with even Japanese visitors commenting that the food served at the restaurant closely resembles those served back home.

“As of now, this is probably the only premium Japanese food outlet owned by locals in Sarawak. Since it opened, iZakaya has been well patronised by diners, since the items sold are reasonably priced.

“We are proud to have come up with the iZakaya concept, which is good for the image and reputation of Kuching as a booming city. What is more important, we have helped to develop these two young entrepreneurs – Ting and Phan – to be where they are today,” Liew added.