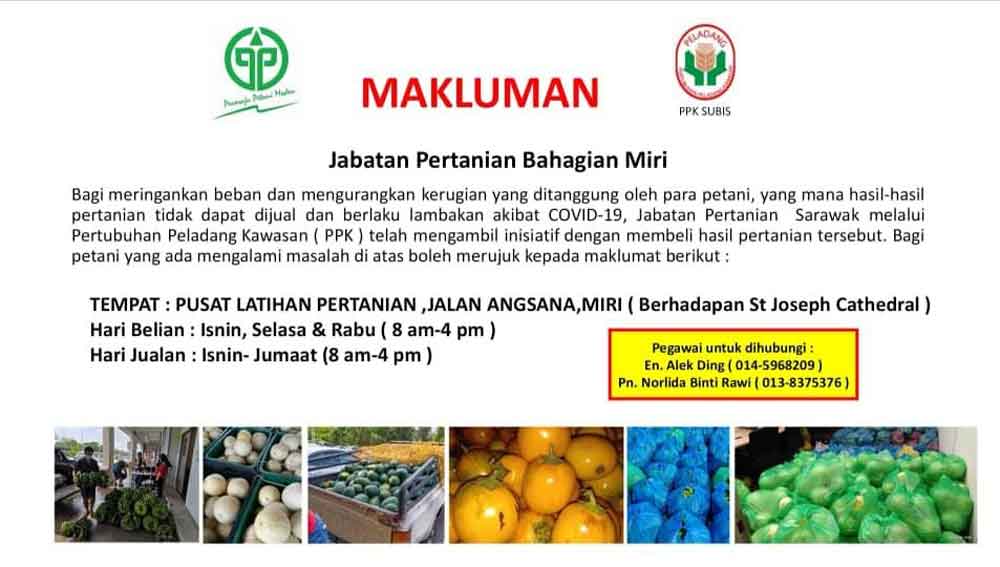 Local farmers with unsold fresh crops can market their produce through a market platform provided by Miri Division Agriculture Department and PPK Subis.

According to the PPK Subis general manager Norlida Rawi, the initiative was first carried out during the first implementation of Movement Control Order (MCO) last year.

“This initiative actually was started during the first implementation of MCO last year from March until May.

“At that time, the local farmers were facing difficulty in marketing their produce. In view that Miri District is still under Red Zone now, we carry out this initiative again to assist the farmers and minimise their loss,” she said when contacted by The Borneo Post yesterday.

In this respect, Norlida welcomed farmers in Miri as well as those from Batu Niah, Subis and Bakong areas to sell their unsold fresh produce such as vegetables and fruits to PPKS.

“The vegetables and fruits which are sold through this initiative are cheaper than the market price.

“But, at least the farmers can generate some income through selling their unsold fresh produce.”

She said the market for the unsold produce started operating yesterday at the Agriculture Training Centre, Jalan Angsana Miri in front of the St Joseph’s Cathedral.

The Miri Division Agriculture Department, she added, is the coordinator for the initiative.

“For this initiative, farmers can come to the centre from 8am until 4pm on every Monday to Friday to sell their unsold produce to PPK Subis.

“However, buying of the produce by the public will only be during Monday, Tuesday and Wednesday from 8am until 4pm.”

Farmers who need further information on the initiative can contact Norlida at 013-8375376 or Alex Ding from Miri Division Agriculture Department at 014-5968209.