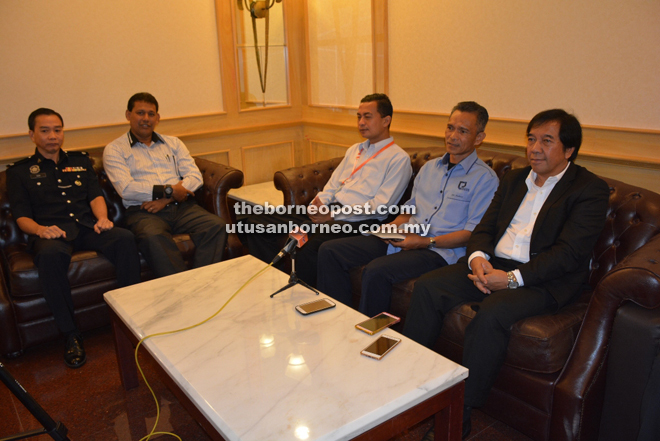 Abd Rahman (second right) address reporters at the press conference as others look on.

MIRI: The Malaysian Ports Auxiliary Police Secretariat (SPBPM) has been granted special powers by the Bukit Aman Police Headquarters (PDRM Bukit Aman) to carry out investigations within their area of jurisdiction without having to go to the police station.

In a press conference held at a hotel here yesterday to reveal the agreement reached with Bukit Aman, SPBPM chairman Supt Abd Rahman Yahya said SPBPM was given the power to open investigation papers and conduct its own investigations.

He said at present five ports, including in Johor, Port Klang and Penang, have their own investigating officers.

“We have achieved an agreement with Bukit Aman Police Headquarters and through our close cooperation, SPBPM was given power to open investigations.

“There are 26 sections that can be investigated by SPBPM including petty crimes and drug-related offences, but it excludes serious crime such as Section 302 for murder,” he said.

He said Bintulu Port had applied to have its own investigating officer which had been approved and Miri Port Authority could have one if it applied.

SPBPM is currently having a five-day conference here which is attended by 31 officers from 27 ports in the country.

Out of 97 ports in the country, only 27 are members of SPBPM.

On the conference, Abd Rahman said it will play a big role in improving the Key Performance Index (KPI) of SPBPM members.

He suggested for it to be held at least twice a year and that more workshops and seminars related to safety at the port be held.

“Other than that, we should also organise study tours to ports in and outside the country,” he added.