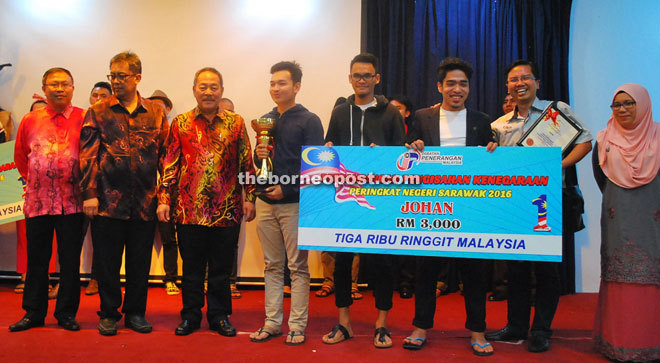 They won RM3,000 cash, a trophy and certificates. They will also represent Sarawak at the national-level competition to be held on Sept 23-25 in Malacca.

Second place went to the Sanggar Kepessa team from Balingian/ Sarikei. Team members Alina Sidek, Muhammad Azri Ali and Abdullah Julaihi delivered a piece on the Sarawak Iban warrior ‘Rentap’. They walked away with RM2,000 cash, a trophy and certificates.

Earlier, Roland said he was impressed and entertained by the creative performances of the participating teams.

“It shows that we are not lacking in theatre or stage performance as we have our hidden talents. Although these performances are still rare here in our society, we should look beyond our shores to boost this industry,” he said.

Learning and understanding of local history should be further promoted especially among the young generation, Roland added.

“I think it would be even better if the participants can link their stories more with local elements. The success of our national heroes should give inspiration to the community particularly the young generation,” he said.

In the meantime, he also congratulated the Information Department for their effort in disseminating messages and information to the public creatively.

For instance, he said, such a competition with an infotainment format was more attractive when compared to conventional methods.

He thus hoped the competition would achieve its objectives of instilling the spirit of patriotism and promoting national integration.