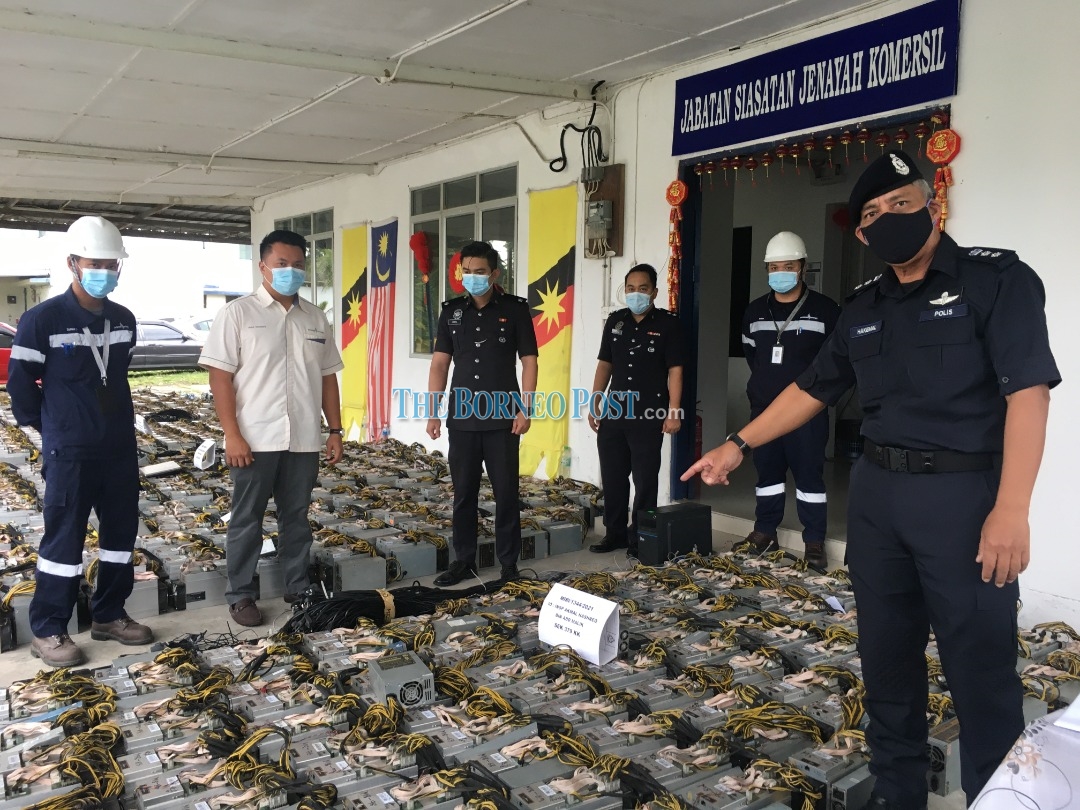 Hakemal (right) points at some of the seized items used in cryptocurrency mining operations that were found to be stealing electricity here recently.

According to district police chief ACP Hakemal Hawari, the illegal activity was uncovered at mining stations situated in five different shophouses at Assar Commercial Centre, Jalan My Bypass Off Jalan Cahaya over the course of a two-day operation from Feb 16 to 17.

“The stealing of electricity supply to carry out cryptocurrency mining activities at all five premises have caused high losses to SEB, at approximately RM4.3 million. It is believed that the premises have carried out the activity for more than six months.

“No arrests were made as all the premises were unoccupied during the raids,” said Hakemal during a press conference at Commercial Crime Investigation Department (CCID) office, Miri District Police Headquarters (IPD) here today.

Hakemal disclosed that during the five raids which commenced at 6.15pm on Feb 16 and ended at 3.05am the next day, the authorities also seized various paraphernalia used, including a laptop, a central processing unit (CPU), modems, 26 modems, 12 routers, 759 units of mining machines, computer wires and mining machine wires of various brands.

“This is the biggest seizure for the state police thus far with a value of RM4.4 million,” said Hakemal.

Hakemal added that the police are conducting further investigations under Section 379/427 of the Penal Code including identifying the involvement of the owners of the premises.

Section 379 of the Penal Code provides for imprisonment for up to seven years or a fine or both, and for a second or subsequent offense may be jailed and may also be fined or whipped if convicted.

Meanwhile, Section 427 of the Penal Code provides for imprisonment for up to two years, or a fine, or both.

Apart from that, the investigation is also conducted by the state’s Ministry of Utilities under Section 33 (5) of the Sarawak Electricity Ordinance which provides for a penalty of up to RM100,000 or five years imprisonment if convicted.