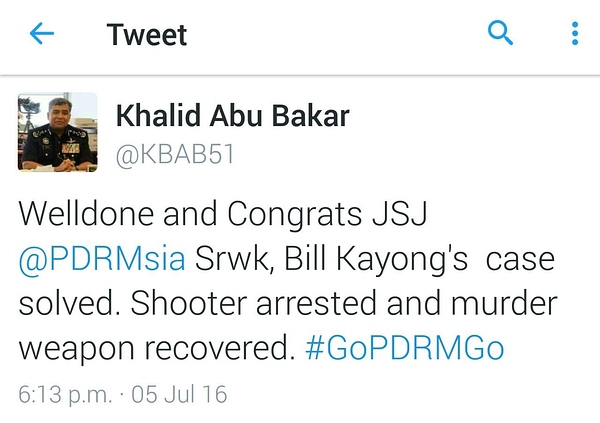 KUCHING: Police believe that they have solved Bill Kayong’s shooting with the discovery of the murder weapon.

At 5pm today, one of the six suspects apprehended earlier this week led the special taskforce to a house at Jalan Hai Nam Lama, Miri, where the suspect pointed out where they hid a shotgun allegedly used in Bill Kayong’s murder.

The shotgun was found with several bullets including a spent casing.

“With the arrest of the suspects and the confiscation of the shotgun, we are confident that Bill Kayong’s murder has been solved,” said the State Commissioner of Police (CP) Datuk Mazlan Mansor in a press statement.

“The Task Force has detected that several other suspects are still free. The details on those suspects cannot be disclosed at this stage. Efforts are still underway to complete the investigation to charge the suspects in court.”

The federal police headquarters in Bukit Aman had set up a special taskforce to investigate the murder of the PKR Miri branch secretary who was shot dead at 8.15am in his Toyota Hilux pick-up vehicle at a traffic light intersection in front of E-mart commercial centre on June 21.

Based on the post-mortem done on June 22, two pellets were found in the wound on his right neck and he died on the spot.