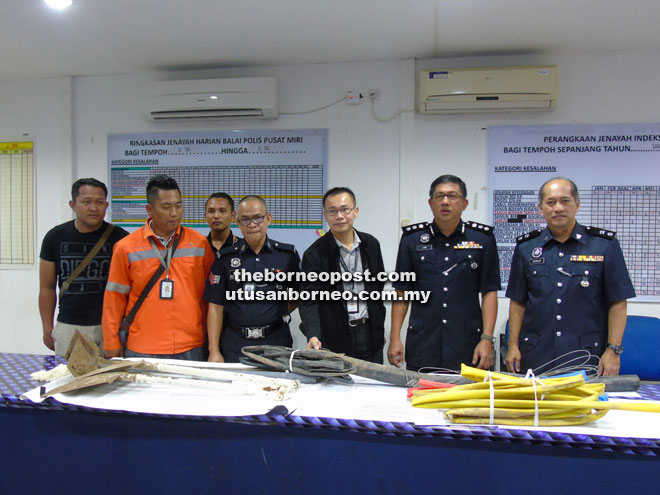 (From right) Stanley, Lim and Tan showing the seized cables.

MIRI: Police have solved 15 cable theft cases here with the arrest of six men since Monday.

District police chief ACP Lim Meng Seah said the six, aged between 27 and 36, are believed to be behind cable theft cases in the outskirts of the city which resulted in Sarawak Energy Berhad (SEB) suffering about half a million ringgit in losses.

“The first three suspects was arrested on Monday at 2.20pm at Lorong Perlis 2-1A, Kuala Baram by a team of CID personnel led by Inspector Nasrul Hadi Jahat.

“The team also seized shovels and a car believed to have been used by the suspects when perpetrating their crimes,” Lim said during a press conference held at the Central Police Station here yesterday.

He added that SEB-owned components were also found in the trio’s possession.

Following the arrests, police picked up three more suspects on Tuesday at two separate locations and seized another car.

“We are still interrogating the six to determine whether they still have more accomplices out there.

“Initial investigation has revealed that three of the suspects have experience working as electricians, meaning that they know where SEB cables are located.

“Some of the suspects have also been previously arrested for the same offence,” Lim disclosed.

The six have been remanded for four days and the case is being investigated under section 431A of the Penal Code, which carries a jail term of up to two years, a fine, or both if found guilty.