It’s probably the first time in history that teddy bears have defeated generals.

http://www2.luventicus.org/maps/europe/belarus.gif
Map of Belarus in Europe

Belarus authoritarian President Alexander Lukashenko has sacked the nation’s air defense chief and the head of the Border Guards service after a Swedish light plane intruded the country’s airspace and dropped in 800 teddy bears decked out in parachutes and slogans supporting human rights. Each bear carried a message urging the hardline former Soviet republic to show greater respect for human rights.

Officials in Belarus denied the July 4 incident until Lukashenko called a government meeting last week to scold authorities for allowing a “provocation.”

“Why didn’t the top brass (generals) stop that flight, whom did they feel pity for?” he exclaimed. On Tuesday, the Belarusian ruler fired the two generals and reprimanded several other top security officials, his office said. Belarusian authorities also arrested a journalism student who placed pictures of the parachuting teddy bears on his personal website and a real estate agent who offered an apartment to the plane’s Swedish crew. The two men were accused of assisting border violators and face up to seven years in prison if convicted.

Thomas Mazetti and Hannah Frey, the two Swedes behind the stunt, said they wanted to show support for Belarusian human rights activists, and to embarrass the country’s military, a pillar of Lukashenko’s power. “Hopefully, we’ve made people more aware in the world that there are others supporting Belarusian people,” Frey said.

Lukashenko has ruled Belarus, a nation of 10 million, since 1994. He has stifled dissent and independent media, earning the nickname of “Europe’s last dictator.” He also has boasted about the capabilities of a joint air defense system that Belarus has formed with Russia, saying it provides a reliable shield against purported threats from NATO. 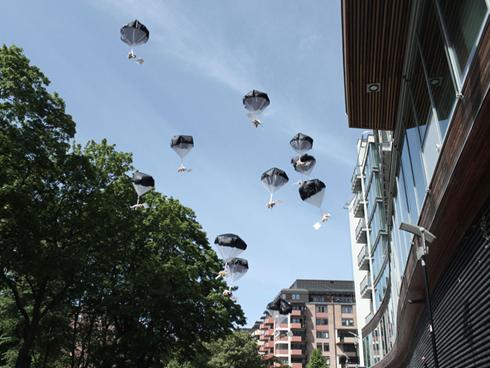 Valery Karbalevich, an independent Minsk-based political analyst, said that purging the generals might be a way to save face in front of Moscow. The Kremlin may use the incident to try to put a Russian general in charge of the joint air defense system, he said.

“It looks like Moscow is cranking up pressure and demanding an answer as to why the much-acclaimed air defense system is riddled with holes,” Karbalevich said. Anatoly Lebedko, the head of Belarus’ opposition United Civil Party, warned that Lukashenko may use the incident to crack down on dissidents in the run-up to a parliamentary election next month.

Belarussian President Alexander Lukashenko, smarting after the stunt, told his new border guards chief on Thursday to use weapons to stop any more unlawful air intrusions by foreigners. “They must be stopped by all force and means, including weapons, regardless of anything. The border guards must prove their loyalty to the fatherland,” he said. hahaha…luckily its only teddy bear.if its u.s paratrooper? die lah.

They won’t risk so little paratroopers into enemy’s territories unless it’s a chaotic, disorder nation, it would be 800 bombs instead :twisted:

They won’t risk so little paratroopers into enemy’s territories unless it’s a chaotic, disorder nation, it would be 800 bombs instead :twisted:

please, the world is already in a big mess as it is…
we don’t need another war going on

but hey, not bad lah those teddy managed to bring down 2 generals…its really hard to do…hahaha

but hey, not bad lah those teddy managed to bring down 2 generals…its really hard to do…hahaha

that I have to agree…

that president Alexander Lukashenko have a similar (a bit) face of hitler. ada misai lagi. haha. i don’t know about belarus being under lousy president. i only know that Aleksander Hleb (football player) is from Belarus. i thought that it is a prosper country. so sad still have this kind of ruler.