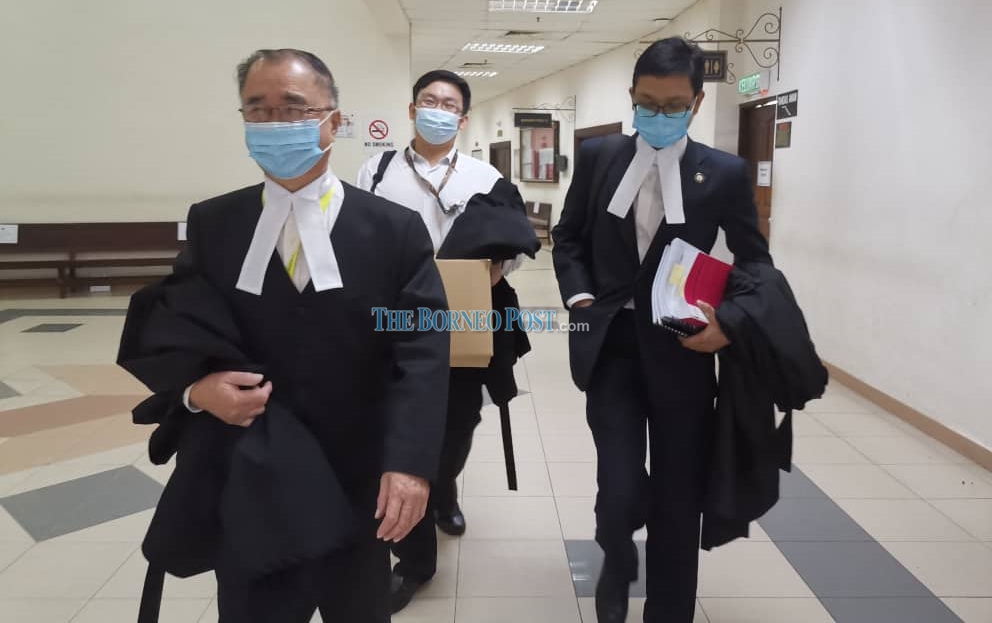 (From left) Fong, Voon and Adzul seen leaving the High Court after the trial.

KUCHING (Jan 12): The plaintiff in the ongoing ‘black hole’ case has requested the High Court to grant ‘remote communication’ to a witness who cannot be present due to Conditional Movement Control Order (CMCO) to be enforced to break the chain of Covid-19 infections.

State legal counsel Dato Sri JC Fong said the witness, who is in Miri, will have difficulties travelling from the northern region to the city in light of the recent worsening pandemic.

He informed the court that the plaintiff would not want to put the witness through the rT-PCR tests if she had to travel from Miri to Kuching for the case.

“She told us last night that she would not be able to make it due to the new MCO. It is not safe for her to travel and take the rT-PCR tests.

“We are asking if the court is willing to give our witness remote communication so that she can give evidence in the court of Miri,” he said during the trial today.

“I’ll let the defendant think about what he has in mind. The case will resume at 10am tomorrow,” he ruled.

The witness from Miri is meant to be the fourth witness to the plaintiff of this case. According to Fong, there will be a fifth witness from Simunjan.

Prior to the request, the court has called three individuals including a journalist from Sin Chew Daily to the witness stand.

Today, a Sin Chew Daily reader was called as a witness to testify for the plaintiff. Two others were called to the witness stand last Thursday.

In 2013, Chong used the term ‘black hole’ to insinuate that a RM11 billion had gone missing from the state coffers.

His allegation was published in a Chinese national daily, a news portal and in leaflets distributed by Chieng Jen and the DAP, and also published in the Rocket, Malaysiakini and Sin Chew Daily on Jan 3, 2013.

As a result, the Sarawak government and the State Financial Authority (SFA) filed a defamation suit against him at the High Court here.

Chong is taking on the defence himself as he has decided to drop Chong Brothers Advocates from representing him in the case.