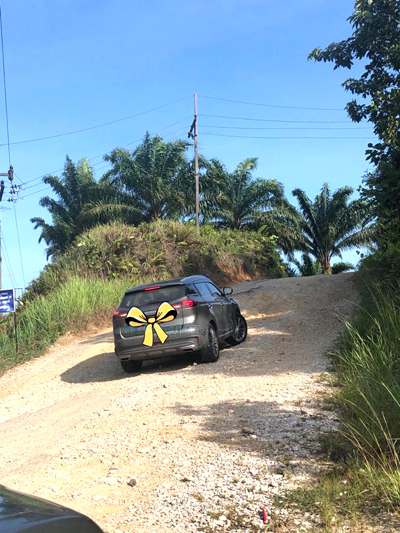 A section of the link road that is still laid with gravel.

MIRI: The upgrading of a link road from Rh Banyang to the main road to Miri undertaken by the Rural and Regional Development Ministry under the Barisan National (BN) government has not been completed.

The project started on April 4, 2012 and was scheduled to be fully completed by July 2012.

In pointing this out, National PKR Women exco member Zulhaidah Suboh said the link road is the daily route for the villagers to go to other places outside their longhouse.

Zulhaidah said during her visit to Rumah Banyang on July 21 she noted that the one-km link road was only half completed.

She claimed that most parts of the road were still laid with gravel though some sections were tar-sealed.

She said she was informed by the villagers that the contractor only came to do the project during the election period and left after that.

She hoped the current Sarawak GPS government and their elected representatives will fulfil their election promises to the longhouse folks.

Zulhaidah, who is also PKR Sibuti women chief, stressed that development and assistance should be extended to the people fairly by the federal government and state government, whether they are in rural or urban areas.

“I call on the representatives not to just make empty promises to the people especially during election but deliver the promises and bring the much-needed development to the rakyat,” she said.