PKR says no interference in seats for GE14 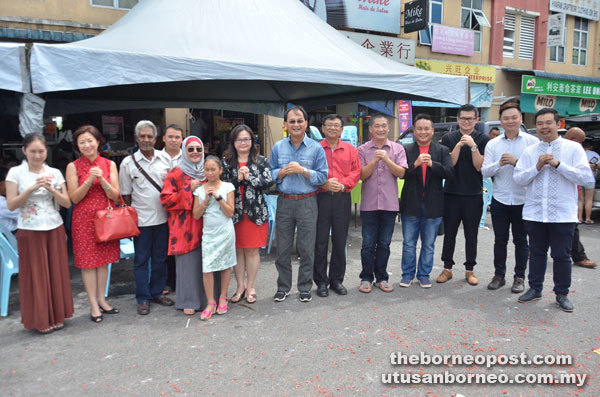 (From fifth right) See, Dr Teo, Baru, Voon and others in a photo-call with their guests.

KUCHING: The state PKR says there will be no interference in the allocation of seats once a joint-statement has been made along with its partners in Pakat Harapan (PH) soon.

Ba Kelalan assemblyman Baru Bian, who is also state PKR chairman, said his party would make an announcement with its PH partners on seat allocation for the next general election (GE14) in one or two weeks’ time.

He was confident that there would be no issue because they had more or less some consensus on the matter, adding that they would hold a meeting soon, followed by a joint statement later.

“We will be different this time. We want to look into the future for the best interest of Sarawakians. We will not look at the past,” he told reporters during the PKR Chinese New Year open house at its service centre in Maong Bazaar yesterday.

Baru was responding to a question if the joint statement later would be final as there might be some interference in the list, like what had happened in the previous years.

Earlier, Batu Lintang assemblyman See Chee How – also the state PKR vice-chairman – said they already had a list of potential candidates but it (list) had yet to be finalised until middle of this year.

He also said there were seats with more than one potential candidate recommended by the division, state and others.

“We are now going through the process of determining which candidate for which seat. We have the list on hand. The candidates are now working on the ground and we have to assess them. Most of them are known to the locals because they have started working,” he said.

A large crowd came to the open house, themed ‘Celebrate Diversity in the Spirit of Sarawak’ yesterday, where they were served with the famous ‘Ah Ling’s Laksa Sarawak’and ‘Ah Kong’s Kolo Mee’.