PKR Sarawak united despite resignations in Sabah, ready for GE14 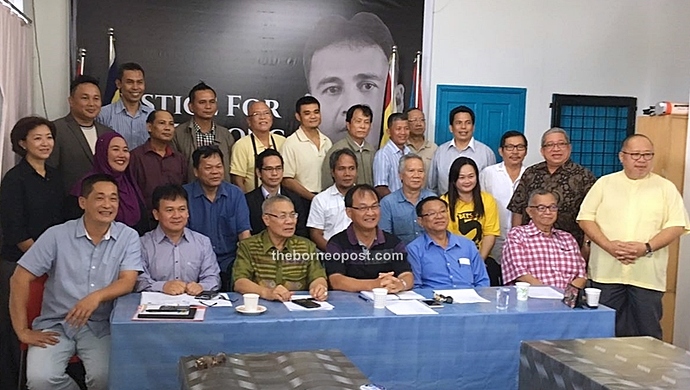 PKR Sarawak leaders in a show of unity. Seated from left are See, Ali, Mansor and Baru.

The recent resignations by PKR leaders in Sabah did not seem to affect the party in Sarawak, as evidenced by the presence of the party’s three assemblymen and sole MP at the PKR Sarawak Leadership Council meeting this morning (Oct 8).

Its chairman Baru Bian, who is also Ba Kelalan assemblyman, told reporters after the meeting that the party had been instructed to submit the names of candidates participating in the 14th GE by the end of the month.

“We have been asking the branches to get ready,” he said.

Baru said the presence of Mansor and other leaders from the central main body enabled PKR Sarawak leaders to convey the special position of Sarawak, the unique challenges in the state and issues special to Sarawak.

Baru added that such issues include the ongoing struggle for more oil and gas royalties for the state and making English as official language, all of which have been conveyed to Chief Minister Datuk Patinggi Tan Sri Adenan Satem.

On a related matter, he said he did not foresee any problems in seat negotiations with Pakatan Harapan partners DAP and Amanah.

Meanwhile, Mansor said the PKR main body has full confidence in its leaders in Sarawak.

“We are not going to undermine what leaders in Sarawak say. We certainly give thought to what has been decided here,” he said, adding that Sabah and Sarawak have different political landscapes.