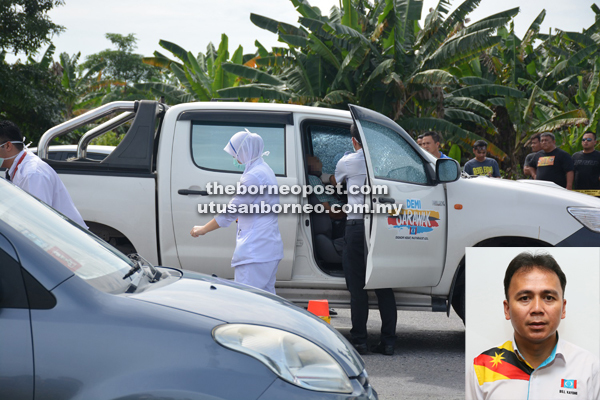 Paramedics check on Bill who was found slumped in the driver’s seat. (Inset) Bill Kayong.

Bill, 43, suffered a fatal gunshot wound on the right side of his neck and was found slumped in the driver’s seat at the busy Tudan-Permyjaya-Kuala Baram traffic light intersection.

He died on-the-spot at about 8.30am but his murder was only uncovered over half an hour later as those who saw it probably fled and motorists passing by were unaware of the incident.

The modus operandi might be that a professional killer who had probably studied his movement had tailed him to the traffic light which is away from the nearest CCTV operated by Miri Police further down the road.

The deceased’s heart-broken wife Hasyikin Hatta, 41, when met at the scene yesterday said Bill had left their house in Senadin at around 8am for work as he normally did. 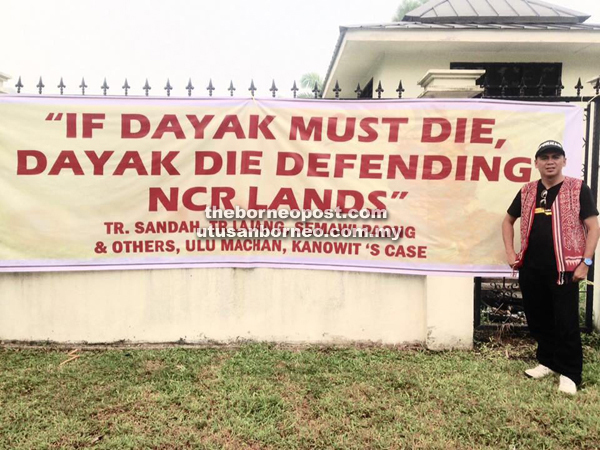 A photo of the late Bill posing in front of a banner hung up at the fence of the courthouse in Kuching last year when an NCR case involving TR Sandah, TR Lajang, Semawi Paong and few others was being heard in court. — Photo taken from Bill Kayong’s Facebook page.

She was shocked when a worried friend called her and inquired about her husband’s stationary vehicle in the middle of the road.

“My friend was heading to E-Mart this morning and upon arriving at the traffic light, she was puzzled when she saw my husband’s car stationary in the middle of the road.

“She immediately called me and because I was worried, I asked her to fetch me from our house and take me to the scene,” she said.

The deceased left behind two children – a son who has just finished his secondary school education and a girl who is in Form Two.

The police have classified the case as murder and it is being investigated under Section 302 of the Penal Code.

When interviewed further on whether the area has any CCTV, Dev Kumar replied in the negative.

“We are appealing to witnesses who may have witnessed the shooting to come forward to assist the police in the investigation.

“The traffic light intersection is normally busy during that time of the morning and we believe many motorists may have witnessed the incident,” he said.

“We give assurance that we will conduct our investigations into this murder thoroughly and will leave no stones unturned,” he said.

No arrest has been made at press time.

Meanwhile, the deceased’s boss Dr Teo was too distraught to give any comments at the scene.

Miri OCPD ACP Junaidi Bujang was present with his CID team combing for clues at the scene and traffic police were seen maintaining public order as the curious crowd swelled to hundreds.

In the May 7 state election, Bill was PKR candidate in Bekenu against direct Barisan Nasional (BN) candidate Rosey Yunus and two other candidates – Independents Austin Sigi Melu and Peter Jelin.

Rosey retained the seat with a majority of 4,789 votes.