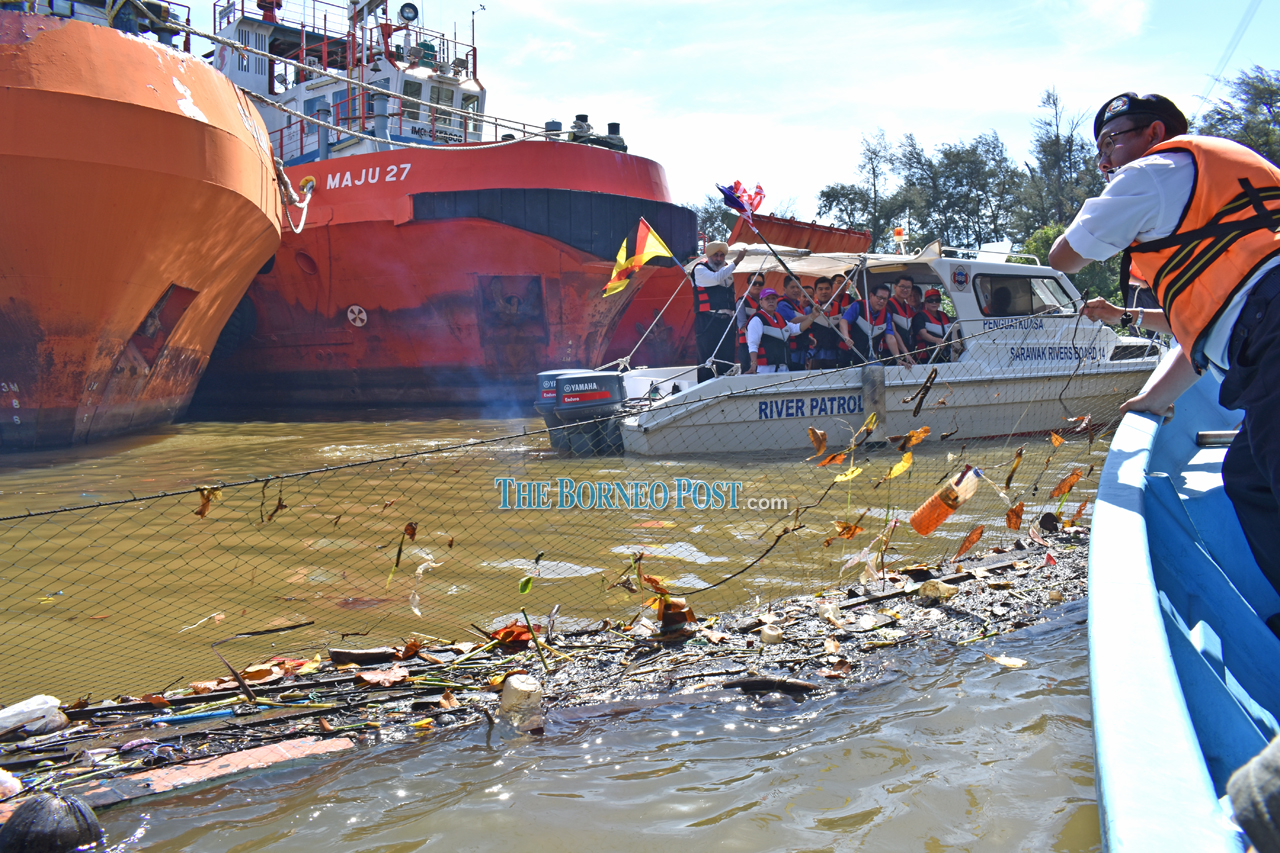 Lee (front, second left) seen on board a river patrol boat during the inspection on the just-installed rubbish trap in Miri River.

The pilot project by Sarawak Rivers Board (SRB) is implemented in collaboration with the Drainage and Irrigation Department (DID) and Miri City Council (MCC).

“The idea behind it is to stop the rubbish floating in the river from flowing further out into sea.

“The installation of the rubbish trap, which is made of recyclable materials, is to enable the authorities to monitor the amount of rubbish (in the river),” said Minister of Transport Datuk Lee Kim Shin when met by reporters at Kampung Piasau Utara Fishermen’s Market jetty yesterday.

Specifically, the trap would retain and collect the floating rubbish or debris in the river and also the monsoon drains, so as to minimise river pollution caused by waste deriving from the residential and construction areas, by preventing them from flowing out into sea.

Lee said the observation and results from this pilot project would be used as a reference in designing the prototype rubbish trap that would produce a much more effective outcome.

He said the MCC would be tasked with cleaning the rubbish trap three times a week – during low tide.

However, he also highlighted that such system would only prove effective with the help of education and awareness-raising programmes.

“Responsible handling of rubbish is of utmost important. The council must educate the residents, who live near the riverbanks and other parts of Miri, to not throw rubbish recklessly – the MCC must be active on the ground.

“Another possible reason as to why many still throw rubbish into the drains and the river is not having adequate rubbish bins; hence, MCC must provide enough communal rubbish bins and scavenging trucks to collect rubbish.

In places like Tudan, often the rubbish bins are noticeably overflowing due to their smaller size, which are unable to accommodate high volume of rubbish.

“Of course, heavy penalty and strict enforcement must be implemented as this is also a part of the effort,” he added.

Lee also commended the use of recyclable materials to build trap – he described it as being ‘the simplest and cheapest way of practising the 5R (reduce, reuse, recycle, recover, repair) concept.

“The SRB officers personally went down and installed the trap; thus they deserve the credit. The overall cost of two units of rubbish traps that use multipurpose nets, fishing lines, plastic bottles and sand is only RM585, and already the traps have collected a lot of rubbish.

“If we use a more expensive trap, it might end up being stolen and so, it is not a viable and sustainable option for us,” he said.

Lee, who is Senadin assemblyman, said the next site for the trap would be the Lutong Bridge, adding that this would likely be done next month.

“Thus, this initiative by the ministry, the SRB, the DID and the MCC could be the effective way to tackle the pollution problem. We (MCC) will collaborate to the fullest extent to achieve success,” he said.