Philippine police have killed a suspected Malaysian terrorist who allegedly was planning a bomb attack in Davao, one of the largest cities in the country’s south. Davao city police chief Ronald de la Rosa says the suspected terrorist, identified as Mod Noor Fikrie Bin Abud Kahar, was fatally shot by police and his wife arrested late Friday following a scuffle inside a hotel.

De la Rosa says intelligence agents had received a tip from a “very reliable source” that the couple were plotting a terrorist bomb attack somewhere in Davao. As the couple were checking out the hotel at 10.00pm, police officers cornered and tried to seize the man, but he broke free and threatened to explode a bomb inside a bag his wife was carrying.

Police says the man grabbed the bag from his wife and run toward the nearby Peoples Park where crowds of people were converging at a midnight sale. “If you arrest or shoot me I have a bomb. I will explode it,” Kahar screamed. When he was about to detonate the bomb using his mobile phone, police shot him.

“Take-down orders were given to SWAT snipers but it could not be implemented since the area was overcrowded with people,” de la Rosa told reporters by telephone. The bomb was subsequently defused by demolition squads. 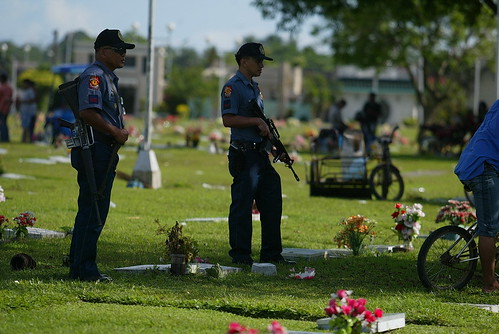 The organization, listed in the United Nations as a terrorist group, has been fighting to incorporate Indonesia, Malaysia, the southern Philippines, southern Thailand, Singapore and Brunei into one transnational Islamic caliphate.

Two months ago, Australia expressed concerns about the possibilities of growing extremism in Malaysia, with the head of the Australian parliamentary foreign affairs committee writing a letter to the Malaysian government seeking assurances that Islamic terrorists are not being funded through Muslim tithes known as zakat. Australia concerned about the growing radicalization in Malaysia

Michael Danby, the chairman of the joint committee on foreign affairs, defence and trade, said he was shocked by the revelation tithes or zakat from a Malaysian company as much as $300,000 may have been diverted to Jemaah Islamiah for radical causes.

Joseph Collins, the Asia-Pacific manager of an Australian corporation with a subsidiary in Malaysia, gathered the case and passed the information to the Australian Security Intelligence. “As a result of this damning evidence, we would like to ensure that money is still not being transferred to extremists,” Mr Danby told the Malaysian high commissioner in Canberra, Salman Ahmad.

and it will all start moving now…

may the gods help us malaysians…