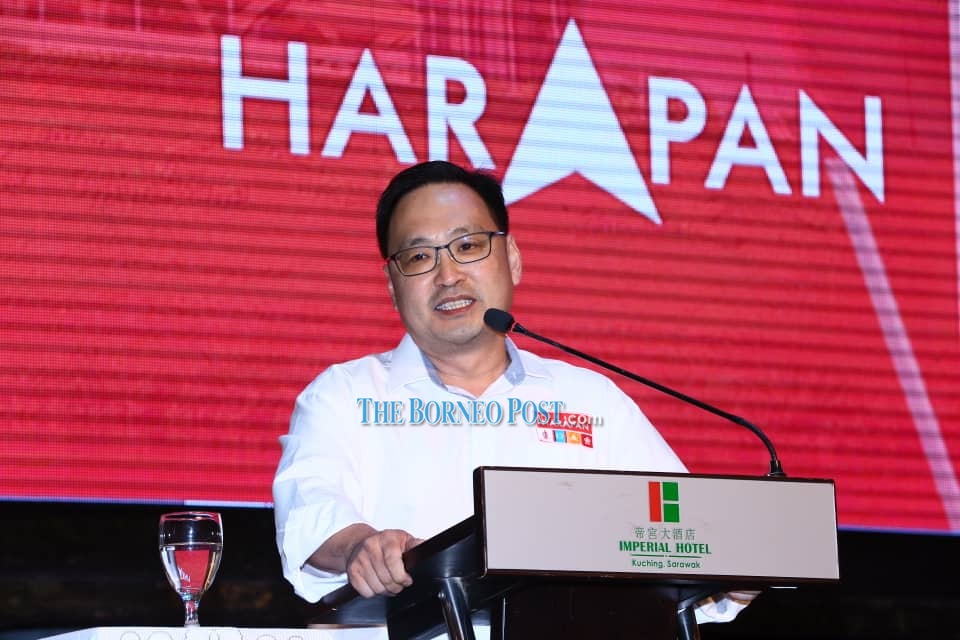 KUCHING (Apr 3): Pakatan Harapan (PH) Sarawak chairman Chong Chieng Jen has challenged Prime Minister Tan Sri Muhyiddin Yassin to show his sincerity and immediately convene Parliament to table the Constitutional Amendment Bill to restore the status of Sarawak and Sabah in the Federation as envisaged in the Malaysia Agreement 1963 (MA63).

He said to restore the ‘territory’ status of Sarawak as enshrined in MA63, there must be an amendment to the Federal Constitution Article (12), not by the mere media announcement of Muhyiddin during his two-day working visit to the state since April 1.

“We, PH Sarawak, hereby call upon Muhyiddin to show his sincerity to immediately convene Parliament to table the Constitutional Amendment Bill to restore the status of Sarawak and Sabah in the Federation as envisaged in the MA63.

“We, PH Sarawak, in today’s (Apr 3) meeting have also resolved that all PH Sarawak MPs will support such constitutional amendment to restore the original version of Article (12) of the Federal Constitution,” the Democratic Action Party (DAP) Sarawak chairman assured.

Chong was referring to remarks made by Muhyiddin on April 1 during a state dinner banquet at the Sarawak Legislative Assembly (DUN) Building here.

Muhyiddin that night announced that the Special Council on MA63 would decide on several issues including the Federal Constitution amendment and socio-economic matters concerning Sarawak and Sabah sometime next week.

He said the three working committees in the Special Council on MA63 had come up with several proposals in regard to the rights of the two Borneo states after concluding their first meeting in the first quarter of this year.

On April 2, Muhyiddin during a luncheon with Gabungan Parti Sarawak (GPS) leaders here called Sarawak a ‘region’ or ‘wilayah’ to set it apart from other states in Malaysia.

“From now on, we should not forget that Sarawak is a ‘region’, ‘wilayah’. I feel like it is a great region. I can’t say it’s a state because it’s big though the population is not big,” the prime minister said, using the Malay word for ‘region’.

Meanwhile, Chong, who is also Stampin MP and Kota Sentosa assemblyman, also assured that all of DAP’s 42 MPs will support the constitutional amendment bill if Muhyiddin were to table it in Parliament.

“With the current 112 MPs supporting the Perikatan Nasional (PN) Government, plus the 42 DAP MPs and one Sarawak PKR MP (Miri), it is beyond doubt that the constitutional amendment will have the threshold 148 MP support in the house.

“The ball is now at the PN Government and GPS court. Convene Parliament sitting and table the Constitutional Amendment Bill.

“Do not merely pay lip service on the restoration of Sarawak’s status as bait for vote. That is insulting and degrading the spirit of MA63 which forms our country,” he said.