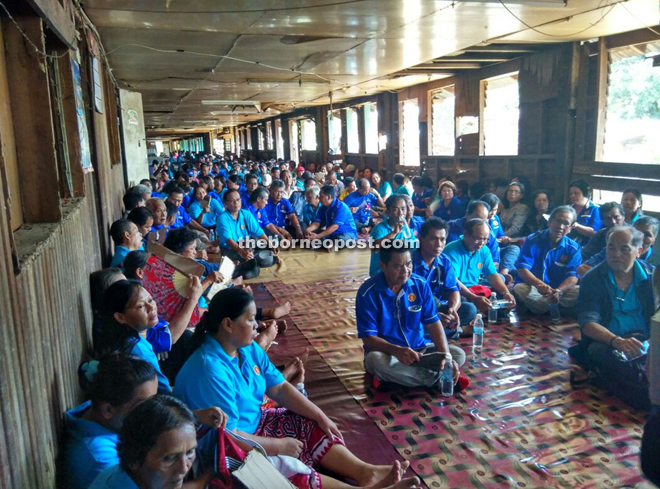 A section of the crowd at the longhouse listens to Penguang (not in picture).

So far he has visited 65 longhouses and the latest one to Rumah Merayang Janin last Saturday, which saw over 600 supporters and followers coming from several longhouses within Sungai Peking area.

In his welcoming speech, the longhouse chief, Merayang Janin, who was overjoyed with the good turnout, thanked Penguang for his effort to come over with a huge entourage.

“We hereby pledge our full support to Datu Dr Penguang Manggil as the candidate for Marudi in the coming state election.

“He is our hope and we are confident of his capability to bring a change to our village which lags behind in terms of development compared to other villages in the constituency.”

He said they would rally behind Penguang to ensure a resounding victory in the election.

Another longhouse chief, Eddie Ambat, echoed Janin’s confidence in Penguang to bring about more development to the villages and longhouses and Marudi in general, if Penguang would be picked as their people’s representative.

“We support Penguang without any doubt because he is a man of calibre, dedicated and has vast experience in the civil service. In short, he is the most qualified candidate,” he said.

Meanwhile, Penguang pledged his utmost best to serve the constituents if he were given the mandate to represent Marudi.

“I have prepared my visions and plans to develop Marudi.

“Have my assurance that I will execute my responsibilities with full trust, according to the wishes of the people who, all this while, have been thirsty for development”.

Penguang thanked Janin and his subordinates for the warm welcome and preparation for his visit.