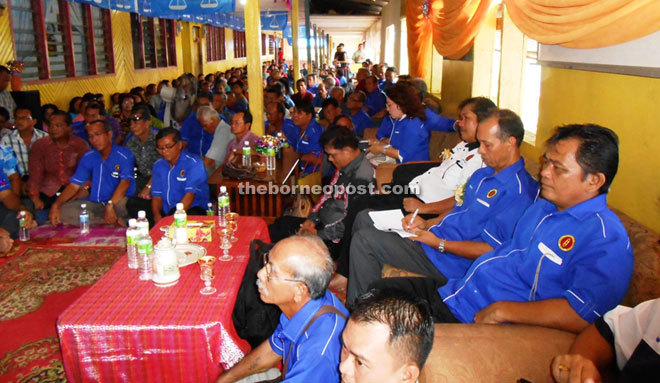 MARUDI: SPDP nominated BN candidate for Marudi, Datu Dr Penguang Manggil, is impressed with the increasing number of supporters in this constituency.

Ever since he held his first meet-the-people gathering in the constituency, he has been receiving overwhelming support from the constituents from as far as Ulu Teru, Peking, Nabor, Pengelayan and Beluru Bakong.

They made it a point to attend his functions because they knew that he is from a BN component party.

Comprising supporters from various BN component parties, they came on their own without expecting any allowance.

During the function, Penguang presented grants of RM15,000 to JKKK of Rumah Larek and RM50,000 to St Paul’s Church of Long Merigam, a Penan longhouse in central Tinjar.

In his speech, Penguang stressed that he was a local and an Iban from Sg Entulang to rebut allegations that he was an outsider.

When met after the function, Penguang said he did not wish to engage in any verbal war with his detractors who had made allegations against him in the newspapers because the constituents knew the reality on the ground.

“I want to focus on my mission to listen, look at and ‘feel’ the issues by going to the ground and engage with the headmen and the people.

“We cannot resolve anything by arguing and quarrelling among ourselves, neither should we tell the world that we have this and that when in reality we don’t,” he explained.