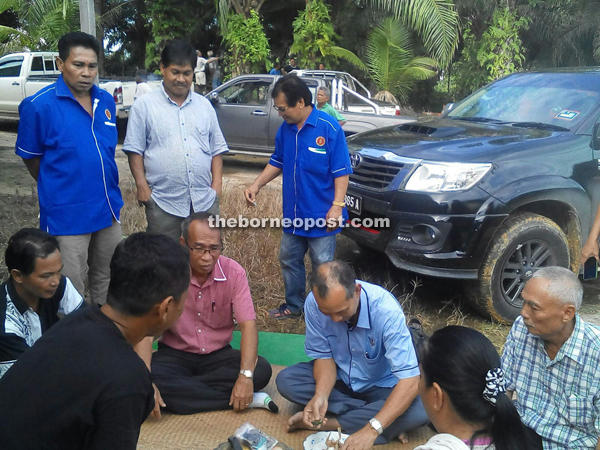 Penguang (seated at second right) is given the honour to perform the miring ceremony in Sebukut, Seruas at Rumah Banyan Gaong.

MIRI: The civil service has served as a springboard for many elected representatives in the state to jump into politics.

However, not all who took the plunge from the relative comfort and security of a government job into the hurly-burly of politics made it and it was never an easy decision to make.

One of the latest civil servants who decided to ‘cast his fate to the wind’ and join in the fray in the next state election is Datu Dr Penguang Manggil, who retired as Ministry of Local Government and Community Development permanent secretary last month.

It was not a hasty decision as he declined an offer to stand in his own area of Marudi back in 1995, when he was working as an officer in the Forest Department as he felt he was not ready for politics then.

It seems the chance to become a state lawmaker was gone after turning down the offer, but early last year he was offered a ‘second bite of the cherry’ when Sarawak Progressive Democratic Party (SPDP) approached him to be its candidate in Marudi for the next state election.

Although he was nearing the end of his career in the civil service, it was still a difficult decision for Penguang to make as he could have chosen the comfort of retirement or more likely continued working in the government service on contract or in the private sector given his excellent track record and vast experience in administration and forest management.

After much soul searching and discussion with his family, Penguang finally decided to accept the challenge.

When asked what spurred his decision, Penguang said he was doing it for the sake of people in Marudi and, as a Barisan Nasional (BN) component party, SPDP is the the right vehicle for him to serve.

“I accept the offer in good faith, though I know full well the tasks of an elected representative and how tough it would be.

“Especially under the existing circumstances and political scenario where my longhouse has been broken apart and the people confused by the infusion of incorrect information,” he said during an interview with thesundaypost here recently.

Penguang quickly found out how tough it is in the political arena as the last few months have been a culture shock for him as immediately the election machinery of his would-be opponent went into overdrive declaring that he was inexperienced and hurling accusations against him.

However, Penguang had steeled himself for the nastiness of political firefights and vowed to remain calm and determined to stay the course.

“I believe that at the end of the day, the truth will prevail and I do not wish to quarrel through the media,” he said.

Last June, he started moving around quietly and began intensifying his ground work during weekends since September.

After officially leaving the civil service on Dec 14, he has gone full swing with meeting the people.

He has also established his election machinery through the SPDP infrastructure and longhouse chiefs who organised major functions for him to meet the grassroots.

To date, Penguang has visited more than 30 villages and longhouses and held discussions with prominent figures and community leaders in Marudi. Some of the places he visited were opposition strongholds, including his own longhouse at Sungai Entulang, Bakong.

“And on grant allocations, I have distributed RM1 million; I have some cheques too with me here, yet to be handed over to the recipients,” he said.

Penguang has also helped schools and religious establishments in various areas in Bakong, which he visited by travelling on rough rural roads and rivers. He is thankful for 36 years’ experience working as a civil servant, which has helped him to deal with various communities.

“What I learnt about the people who supported the opposition was they were not against the government but were expressing their frustration with what is happening on the ground and issues such as land, appointment of community leaders, biased implementation of development projects and distribution of government aid among them,” he said.

On what he would do to address the people’s grouses, Penguang said if elected he would make sure no community would be left out of development projects and serve without any prejudice against anyone.

“I have mentioned it on a number of occasions during my engagement with the grassroots that I will be an elected representative for the people of all races, backgrounds and religious beliefs, and would serve not only SPDP members but all political party members,” he said.

On his priorities if elected, Penguang pledged to understand the prevailing issues and needs, as well as to unite and reconcile ‘broken’ communities and families as a consequence of their different political affiliations.

He would also engage with professionals to chart the future development of Marudi as he noted that infrastructure development, particularly roads, electricity and water supply there still needed improvement.

Despite the tough challenges, Penguang is gratified that the response from the ground has been encouraging as many see him as the man to address their problems and bring fresh impetus to development in Marudi. 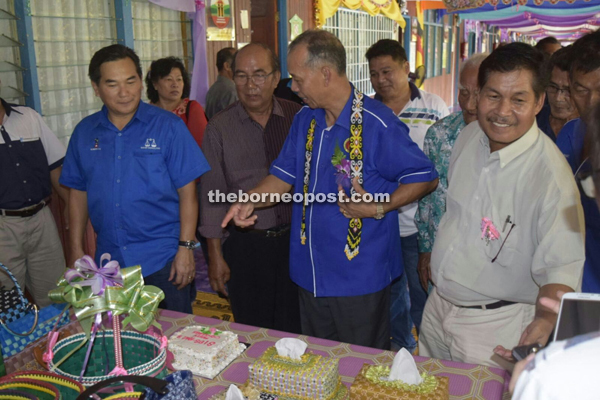