Community leaders among the 300 Penans at the fly the Jalur Gemilang ceremony. 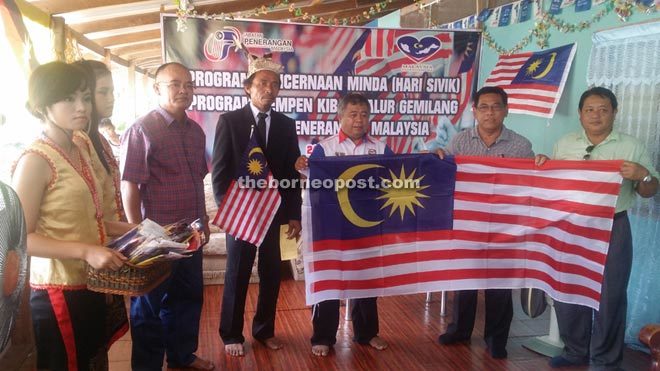 MIRI: The Penans of Rumah Magelit, Bukit Balat, Lapok in rural Tinjar were excited to join other Malaysians celebrating National Day on Aug 31 this year.

They hosted a fly the Jalur Gemilang (national flag) ceremony on Monday to show their love for the country and its leaders.

Among the 300 sharing the joy of being part of an independent Malaysia were Marudi Information Officer Joseph James, 55, and community leaders Pemanca Enggah Muga and Penghulu Ela Bong, and village headman TR Wen Magelit.

At the function, Albania reminded the people that the national flag was a symbol of a sovereign Malaysia that they should be proud of.

“Community leaders too must be exemplary in their actions in respecting the national flag and songs besides rallying the people’s support in ensuring government development programmes and policies are successfully implemented,” he said.

At the function, Albania handed over the Jalur Gemilang to the 55 village headmen present.

Joseph commended the village headmen for supporting the Fly the Jalur Gemilang programme.

He advised the people to take an active role in the implementation of the various rural development projects like water and electricity supply and roads.

TR Wen assured the government of his people’s continued support. They were thankful that Datuk Sylvester had relentlessly brought government projects to the people including Penans in his village.

He said among the basic amenities enjoyed by the villagers were electricity supply and tarsealed road while clean piped water will be supplied by the soon to be completed water treatment plant at Lapok.